Five individuals are facing charges after a drug trafficking investigation in St. Catharines, Thorold and Welland was completed, according to police.

On Thursday January 2, 2020, with the assistance of the Emergency Task Unit (ETU) search warrants were executed at residences in the area of Port Robinson Rd and Kottmeier Rd in the City of Thorold, Kent St and Regent St in the City of Welland and Fruitland Rd and Arvin Ave in the City of Hamilton.

Also seized were five (5) firearms along with over 200 rounds of ammunition and brass knuckles.

39-year-old Jeffery England and 34-year-old Jessica Travers, both of the City of Thorold, are facing the following alleged charges:

- 3 counts of possession for purpose of trafficking a controlled substance

- 1 count of possession of proceeds obtained by crime

- 1 count Possession of a Restricted Firearm with Ammunition

- 1 count Careless Storage of a Firearm

36-year-old Chris Arnoczki and 29-year-old Joanne Short, both of the City of Welland are facing the following alleged charges:

- Possession of proceeds obtained by crime under $5000

- 5 counts Possession of a Firearm or Ammunition

- 1 Possession of a Loaded Restricted Firearm

- Possession of a Restricted Firearm with Ammunition

28-year-old Shawn Marsh of the City of Welland is facing the following alleged charges:

- 2 counts of possession of a controlled substance

England, Travers, Arnoczki, Short and Marsh were all currently being held in custody pending a bail hearing on Friday January 3, 2020 at the Robert S.K. Welch Courthouse in St. Catharines. 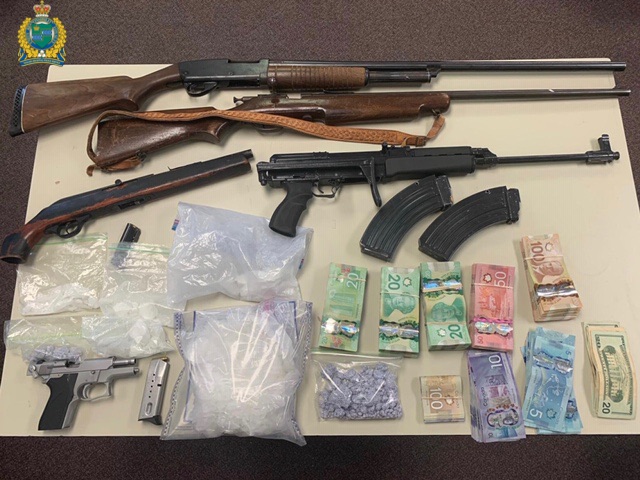