Popular Niagara Falls landmarks: What used to be there? 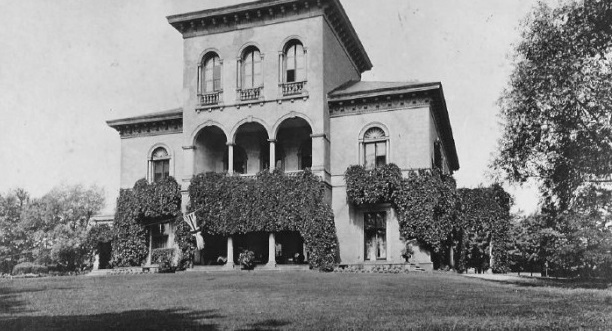 Ever wonder what used to be there when it comes to development in the niagara area? Here’s a look at a couple of prominent spots, and a look at what used to be situated on the land where these  landmarks now stand. *Photo taken from the Niagara SkyWheel*

The Rainbow Bridge and its famous arch structure connects Niagara Falls, New York,USA  to Niagara Falls, Ontario, Canada over the Niagara River gorge. It’s not uncommon to see a rainbow just upstream from the bridge, which is how the name “Rainbow Bridge” came to be.

The Rainbow Bridge began construction in May 1940, and was officially opened on November 1, 1941. This bridge replaces the “Honeymoon Bridge” (1898-1938), however it is new in that it was constructed 500 feet north of its previous position. The “Honeymoon Bridge” collapsed on January 27, 1938 after an ice jam in the river. To assure its safety, the Rainbow Bridge abutments and approach spans rest on solid rock high enough on the sides of the gorge. To ensure its safety, the girders were situated much higher

Click here for more about the Rainbow Bridge and how it came to be. *Pictured Above: The “Honeymoon Bridge” upon collapsing in January 1938* The Skylon Tower is Niagara’s tallest structure, measuring 520 feet above ground level and 775 feet above the base of the Falls. It was inspired by the Space Needle Tower in Seattle, Washington, and was built by the general contractor, Piggott’s Construction Company. Construction began in May 1964, and was officially open to the public on September 31st 1965. It was on October 28th 1964, that the tower was officially named the “Skylon Tower”. The company president at that time, Edward Bull Jr., described the name as meaning a “space aged version of a skyscraper”. *Pictured Above: A timeline of the Skylon Tower in 1964 to current*

Prior to the Skylon Tower, the land was leased from Mr. George Sainovich and the New York Central Railway in which it was being used as a parking lot — which only cost .50 cents to park for the whole day!

Here’s an old article from the Niagara Falls Gazette, dated  December 5, 1965 in which it tells the story of how the idea for the Skylon Tower was derived. Long before Clifton Hill became known as “the Street of Fun by the Falls”, it owed its roots and name to one man – Captain Ogden Creighton. He was an officer in the British army who had served with the 70th and 81st Regiments in various parts of the world, including the Far East.

Around 1830, Captain Creighton came to Niagara Falls and acquired a sizeable tract of land on what is now the south side of Clifton Hill as well as the area just beyond the top of the hill. He had this land surveyed and laid out for a town site, which he named Clifton, presumably after Clifton on the gorge of the River Avon in Bristol, England. On the edge of the high bank facing the American Falls, Captain Creighton built his own residence, naming it Clifton Cottage. It stood where the Great Canadian Midway is now located. The Creighton family left Niagara Falls in the early 1840s, moving first to Toronto and then Brantford, Ontario. Captain Creighton died at about 1850.

Clifton Hill was known as Ferry Road since 1834, when small rowboats were utilized to transport people across the Niagara River between Canada and the USA (approximately where the Hornblower Niagara Cruises loading dock sits).

In 1842, a man named Samuel Zimmerman created an estate property along the south side of Ferry Hill, and called it “Clifton Place”. On his estate, Zimmerman undertook to create many gardens and several large fountains, including the “Zimmerman Fountain” which still exists down in Queen Victoria Park. The estate of Samuel Zimmerman occupied the entire south side of Ferry Hill, and today this property is owned by HOCO (Harry Oakes Company). He was killed on March 12th 1857 in the Desjardins Canal Railway accident.

Senator John T. Bush of Buffalo, New York bought his estate, along with the adjoining properties. Senator Bush fixed up the estate and lived there with his family for over 50 years. Upon his death was when tourism really started to boom, and his wife sold their property to Sir Harry Oakes. It was shortly after then that the entire “Ferry Hill” (Clifton Hill) property started to cater to tourism. In the 1950′s the Park Motor Hotel (which eventually became known as the Comfort Inn Clifton Hill), and the Fallsway Hotel (which later became the Quality Inn, and now the site of the Niagara SkyWheel) were built on a large portion of that estate.

In November 1965, the old Clifton Gate House located on the south side Clifton Hill was demolished to make way for the Hollywood Wax Museum. It is from approximately the mid-60′s that Clifton Hill really became known as the “Street of Fun by the Falls” with all its hotels, attractions, souvenir shops, and restaurants popping up. *Pictured Above: “Clifton Place”. The grassy area in the foreground now stands all the attractions on the south side of Clifton Hill (HOCO property)*

“Journey Behind the Falls”

Ever wondered how the “Journey Behind the Falls” attraction came to be? The curiosity of viewing the Falls was always there, and people used to scale down walls and rock just totry and catch a glimpse of is natural wonder. In 1818 the first enclosed stairs were built, and a spiral staircase was created in 1832 making way for the “Sheet of Falling Water” attraction.

In 1885 when the Niagara Parks Commission was created in order to oversee the area, the commissioners removed the staircase and installed a water hydraulic powered elevator shortly afterwards in 1887. The first tunnels were created in 1889, and in 1902 the hydraulic lift was taken over by the Ontario Power Company. In exchange for using the elevator, the Ontario Power Company agreed to sink a shaft through the rock to create a new tunnel that an electric elevator could descend down.

The Table Rock Complex began to be built in 1925 in which this elevator was duplicated, and the “Scenic Tunnels” attraction began.

Since then, new tunnels were cut into the rock, and in 1994, the name “Scenic Tunnels” was changed to the “Journey Behind the Falls”.