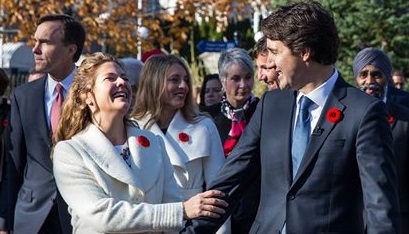 So the question comes up, that has been risen before as PMs come to office with kids.  Should taxpayers be on the hook for nannies?

Prime Minister Justin Trudeau is being put in the spotlight by the opposition for using taxpayer dollars to pay for two nannies helping to care for his three young children.

During the election campaign, Trudeau attacked the Conservative government for handing out tax cuts and benefits, including a new universal child care benefit, to Canada’s wealthiest families (which included his own) and as a result, interim Conservative leader Rona Ambrose not only thinks he should tackle his own child care costs but that Canadians would expect it.

The amount the nannies,   or “special assistants” as they are called under the Official Residences Act, have been hired for is $15 to $20 per hour during the day and $11 to $13 at night.  Hardly a king’s ransom and that has other people balking at the low wages like New Democrat MP Sheila Malcolmson, the party’s status of women critic. However, even Malcolmson acknowledged the fact the employees are being paid out of the public purse seems to contradict Trudeau’s stated position on his own ability to cover his family’s child care costs.

(Below: A nanny to Prime Minister Justin Trudeau’s children, poses for a picture with Ella-Grace, 6, and Hadrien Trudeau, 1. (Facebook) Manuela Gruber Hersch, president of the Association of Caregiver and Nanny Agencies Canada says this controversy has brought a different issue to light as well and that is that there is a shortage of Canadian nannies which is in part due to the previous Conservative government which tightened the rules governing temporary foreign workers. The result according to Hersch…fewer nannies in a culture where Canadians don’t want to be nannies.

Reports indicate that the caregivers for the Trudeaus are both Canadian citizens who were born outside of the country but have been here for some time.  They are employed  as “secondary caregivers” who also perform “other duties around the house.”

Previous post Getting Your Way - Communication Strategies that WORK