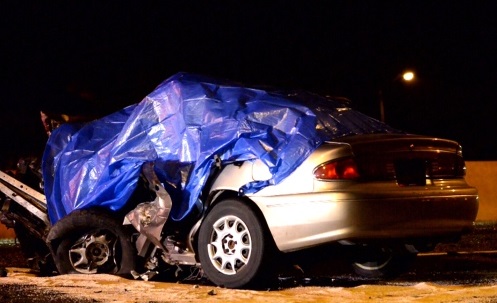 A man from Beamsville with alcohol, cocaine and marijuana in his system plus a sleepwalking disorder when he killed another man by driving the wrong way on the QEW, has been given three and a half years in prison.

Ryan Quatsch, 30, was sentenced Friday by Ontario Court Justice Marjoh Agro.  He had already pleaded guilty to one count of criminal negligence causing death in the Oct. 21, 2014, accident that killed Gregory Morley, 31, of St. Catharines.

Morley was heading home shortly after 5 a.m. after his night shift at work. The crash occurred near Fifty Road in the Niagara-bound lanes.

Agro noted there was no evidence of braking before Quatsch slammed into his victim and that the force of the collision killed Morley, who was pronounced dead at the scene.

Quatsch was originally charged with impaired driving causing death. He had a combination of alcohol, marijuana and cocaine in his system at the time of the crash. Police say they also found a half-empty bottle of Jack Daniels whisky and 286 grams of marijuana in his pickup truck. Quatsch had a personal medical licence for it but Agro noted the amount was over the 150 grams allowed.

Quatsch, had two previous convictions for careless driving and one for drug possession for the purpose of trafficking and his licence had been suspended at the time of the crash.

Although Quatsch showed a disregard for others by getting behind the wheel of his truck, the medical evidence of his parasomnia condition, a sleepwalking disorder was found to be a contributing factor to the crash.

With time already spent in custody, Quatsch has two years and 49 days left to serve in his sentence. He also got 30 days concurrent for marijuana possession and is prohibited from driving for five years after prison.