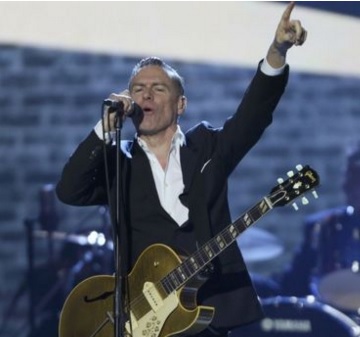 Canadian rock performer Bryan Adams is cancelling a performance this week in Mississippi.  The reason? The state’s new law that allows religious groups and some private businesses to refuse service to gay couples.

Adams said in a statement last night that he was cancelling a show Thursday at the Mississippi Coast Coliseum in Biloxi, citing that he can’t “in good conscience” perform in a state where “certain people are being denied their civil rights due to their sexual orientation.”

The move comes after Bruce Springsteen and the E Street Band cancelled a Sunday show in Greensboro, North Carolina, because of the state’s new law blocking anti-discrimination rules for the LGBT community. The Mississippi law will take effect July 1. Supporters say it offers protection for Christians who follow traditional gender roles and marriage.

Adams said he was using his voice to “stand in solidarity with all my LGBT friends to repeal this extremely discriminatory bill”.

“Hopefully Mississippi will right itself and I can come back and perform for all of my many fans. I look forward to that day.”

Next post PUT DOWN THAT FORK! The 10 WORST FOOD TO EAT