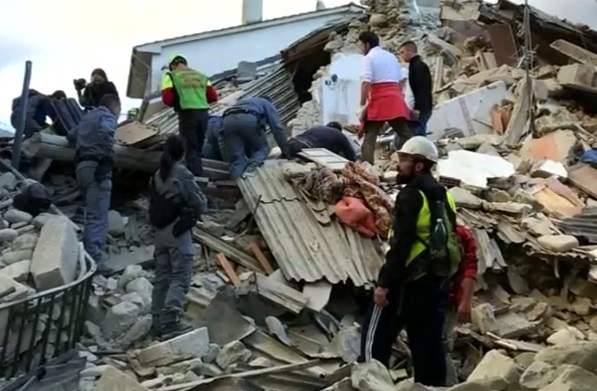 As people slept in central Italy today, a strong earthquake struck, collapsing homes and at least  11 people were reported dead in two towns.  It occurred at 3:36 a.m.  and was felt across a broad area of central Italy, including Rome where residents of the capital felt a long swaying followed by aftershocks.

The hardest-hit towns were Amatrice and Accumoli near Rieti, about 80 kilometres  northeast of Rome.

The centre of Amatrice was hit hard, with entire palazzos razed to the ground. Rocks and metal fell onto the streets and people huddled in piazzas as aftershocks continued into the early morning hours. As daylight came, everyone including, civil protection workers and even priests began digging out with shovels, bulldozers and their bare hands, trying to reach survivors.

The Italian Geological service put the magnitude at 6.0.

Next post GETTING UP EARLY - (How to even if You're NOT a morning Person)...