VIDEO: Trump Defies the Odds and Becomes Next President 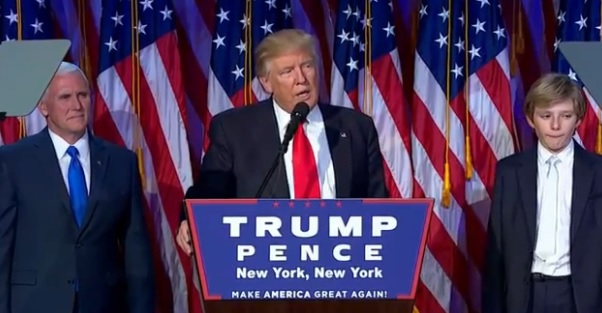 Donald Trump has pulled off a shock US election win to defeat establishment candidate Hillary Clinton and become the 45th President of the United States.

From the moment he entered the campaign, with shocking claims, Trump was widely underestimated as a candidate, first by his opponents for the Republican nomination and later by Hillary Clinton, his Democratic rival.

Trumps incredible rise to the top was largely missed by polling organizations and data analysts and he became the wildcard with the air of improbability that came with his campaign.  His unique style and promise to “Make America Great Again” appealed to many disillusioned voters however and the results speak for themselves.

As for Hillary Clinton, she had her own share of issues including email scandals, but she still went into election day with a lead in the polls.  Quickly however last evening, her confidence in her becoming America’s first female President disappeared as results started coming in.

Here is Trump’s victory speech last night where he said he would: “bind the wounds of division” in the country.

Trump will visit President Obama today at the White House as he enjoys congratulations from world leaders.