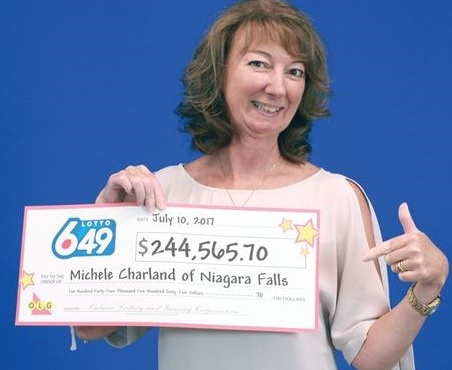 Niagara Falls resident Michelle Charland has won BIG on the Lotto/649 draw, but didn’t notice the first time around.

Charland won $244,565.70 on June 24th, but at first she thought she had won a lot less when she first checked her ticket a day after the draw.

“I used the ticket checker and I was caught by surprise. I thought I saw $244. I saw a few other numbers but I didn’t want to get my hopes up. I took the ticket straight to the retailer for validation.”

Charland says her  heart was almost pounding out of her chest and her hands were shaking when OLG called to confirm the win.

Charland and her husband kept the win quiet for a while from friends and family before claiming their prize at the Prize Centre and the first plans for spending involve her buying a new ring to replace one given to her by her husband years ago.

Next post UPDATE LOCATED - Have You Seen This Woman?

Previous post A Couple of Suspensions Handed Out During Weekend R.I.D.E.