TRUDEAU: On the Cover of the Rolling Stone… 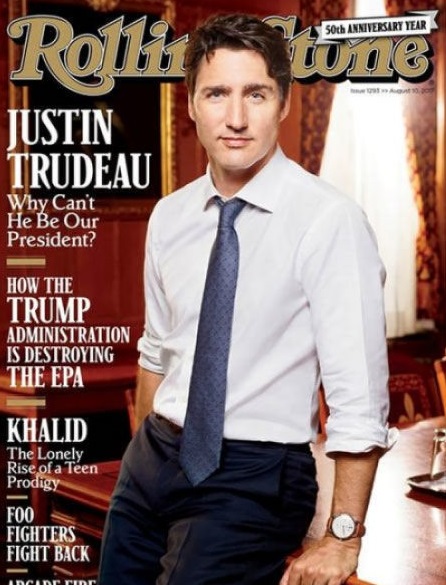 (Prime Minister Justin Trudeau on the cover of August’s Rolling Stone with the caption “Why Can’t He Be Our President?”  (PIC: MARTIN SCHOELLER FOR ROLLING STONE)

It’s official, our Prime Minister has made the cover of the Rolling Stone.

In the August issue, Trudeau is not only featured but applauded and writer Stephen Rodrick, calls him “a progressive, rational, forward-thinking leader” who “overcame tragedy to become Canada’s prime minister”, such as the death of his younger brother Michel who was killed in an avalanche and the death of his father, former Prime Minister Pierre Trudeau.

Of course there is some comparison of Trudeau and U.S. President Donald Trump on “hot” issues like pot legalization, climate change, and (of course) Russia.

There is even reference in the article that “Justin Trudeau is trying to Make Canada Great Again. He is using, let us say, different methods.”

There is some critique of Trudeau’s government as well and of course some of the social media response of Canadians has not been all positive either, but overall, the cover seems to say it all.

Trudeau follows in the footsteps of former U.S. presidents Bill Clinton and Barack Obama among the world leaders who have previously fronted the pop-culture magazine.

For the full story, check out Rolling Stone at this link: http://www.rollingstone.com/politics/features/justin-trudeau-canadian-prime-minister-free-worlds-best-hope-w494098