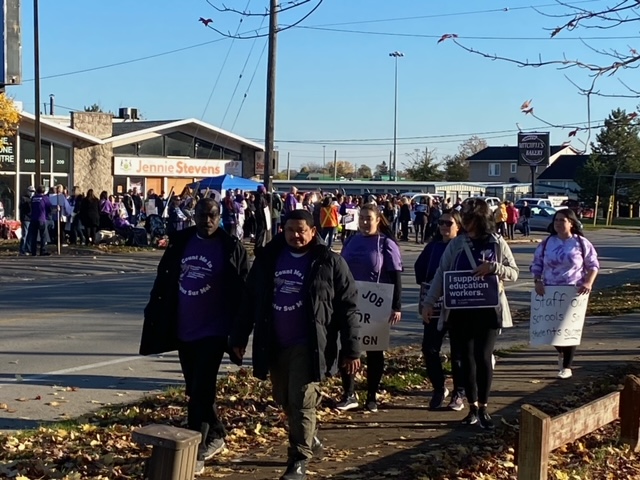 Up to 55,000 education workers, who belong to The Canadian Union of Public Employees (CUPE), began their strike today, picketing at MPPs’ offices, and other government offices and locations across the province.

President of the CUPE Ontario School Board Council, Laura Walton, said the strike will continue until a deal is reached or if their members decide otherwise.

Walton added that parents should have a contingency plan for their children in case the strike continues into next week.

Many school boards across the province had no option but to close their schools to in-person learning today and until job action ends.

In Niagara, teachers unions are encouraging their members to show support by wearing purple and visiting picket lines outside of school hours.

(pictures on Carlton Street in St. Catharines by office of Jennie Stevens MPP where hundreds showed up to strike, and hand out leaflets to passerbys).

One of the largest strike locations was at Toronto’s Queen’s Park where picketers started arriving around 7 a.m. for a full day of protesting.

Hundreds of the protesters were seen holding CUPE flags and signs that said “No Cuts to Education” and “I support education workers.”

Workers are walking off the job after contract negotiations with the government concluded Thursday afternoon. The union provided five days notice of a strike on Sunday.

In an effort to keep children in school, the government passed Bill 28, also known as the Keeping Students in Class Act, Thursday afternoon hours after contract negotiations with CUPE ended.

Bill 28, which was initially proposed on Monday, mandates a four-year contract onto the union members and part of that contract includes a 2.5 per cent annual wage increase for individuals making less than $43,000 a year and a 1.5 per cent increase for all other employees.

The bill also includes a daily fine of up to $4,000 for workers who participate in “illegal” job action and the union itself could be hit with a $500,000 fine.

The union has said that it will fight the fines and, if necessary, pay them for members on strike.