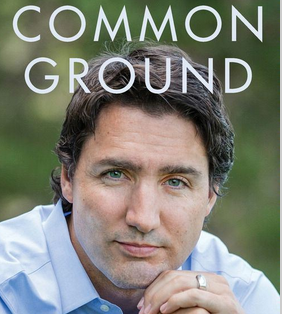 Just one year before the next scheduled election, Justin Trudeau ‘s memoir: Common Ground,  hits the shelves, depicting him as an advantaged  kid who experienced many challenges growing up which made him the man he is today.

Spanning the years that were his youth at 24 Sussex Drive as the son of Canada’s then Prime Minister Pierre Trudeau to his first campaign in Papineau, to his role as the Liberal leader now, the book is filled with anecdotes, personal reflections, and never-before-seen photographs from his own collection.

It takes us through some of the most significant moments in his life including his parent’s public breakup, his mother’s struggle with mental health issues and the challenges of living a life under the scrutiny of the media.  It also touches on his decision to follow his father’s footsteps and enter into politics.

All proceeds from the book will be donated to the domestic programs of the Canadian Red Cross Society.

What do you think? Would you buy this book?  Are you interested in the Trudeau story? Comments Welcome!

Previous post The Best Thing That Happened to My Career: Becoming a (Very) Young Parent