Weekend Adventures in Niagara – Fun in our Own Backyard! 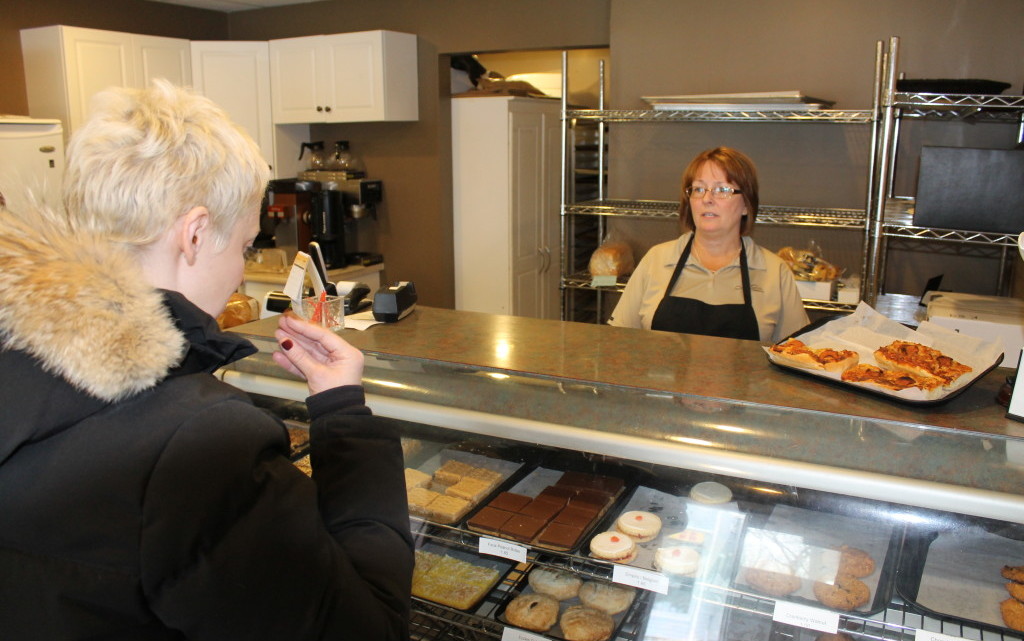 Sometimes the best days are the ones that aren’t planned.

Every Saturday so far this winter, Ken and I have made a point of getting out and doing something fun in the Niagara region. This has been great – first, because we both loathe winter and need to find ways to make it fun. Second, because there really is a lot still going on in Niagara in winter – more than I realized. So I have been busying myself with doing some research, asking friends for recommendations, and planning what we are going to do. But last week I was really in a winter doldrums funk. The grey skies and snow just wouldn’t end, and I was very achey and tired from starting my zealous workout schedule – in short, I was a bit whiny. All I wanted was to curl up with a good book and stay there till the sun came back.

But on Saturday morning, Ken asked me “What are we doing today?”.

“I don’t know, I haven’t planned anything,” I said. “We really do need to go grocery shopping though.”

He winced. (Ken HATES grocery shopping). Then he said “Why don’t we just pick a place, go there and see what we discover?….How about….Pelham??” Well, the first thing that happily popped into my mind was going to Henry of Pelham winery – though technically they are in St. Catharines, but on Pelham Road. I am always agreeable to a winery visit though, so I said “Sure….but what can we do in Pelham?”

After a quick look on The Niagara Local (a fabulous resource for food, drink and culture in the region), we were set with ideas for our day. And really, what a lovely day it was.

We started at Indulgence Bakery. I had heard fantastic things about their breads. They close at 2pm on Saturdays though, and we arrived just before 1pm. As expected, most of their bread was sold out, but I got Ken some sesame bagels and I got a multigrain sourdough baguette. I was thrilled to see that they made Empire biscuits. I loooove Empire biscuits, it’s a childhood thing. So whenever I find them they are a must buy. We also got a selection of pastries – a raisin butter tart for Ken and a maple walnut square to take home for my Mom. 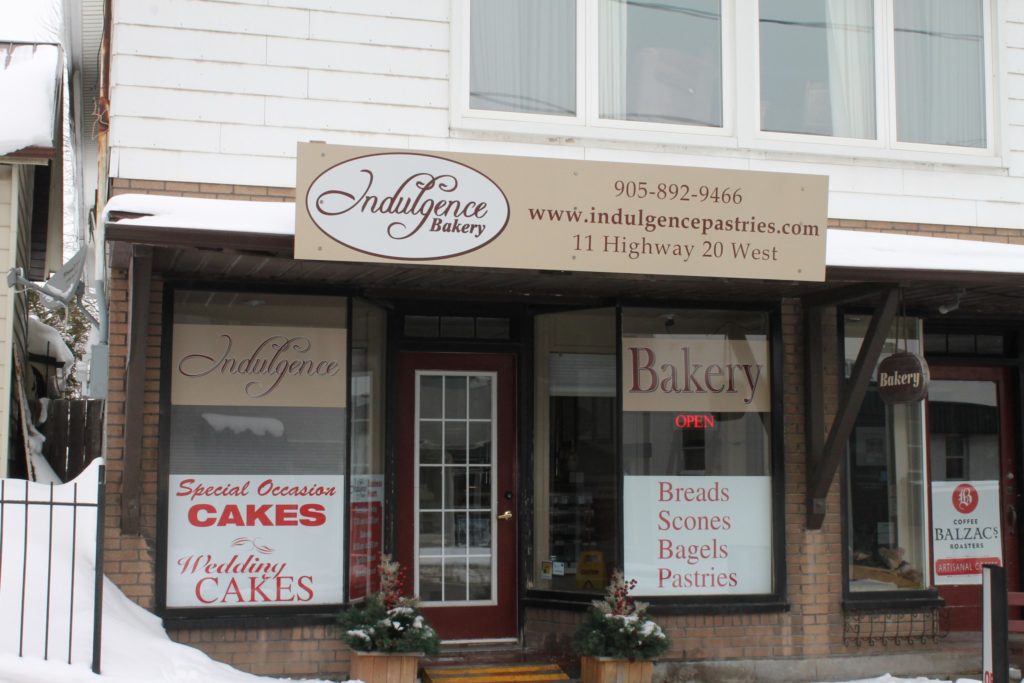 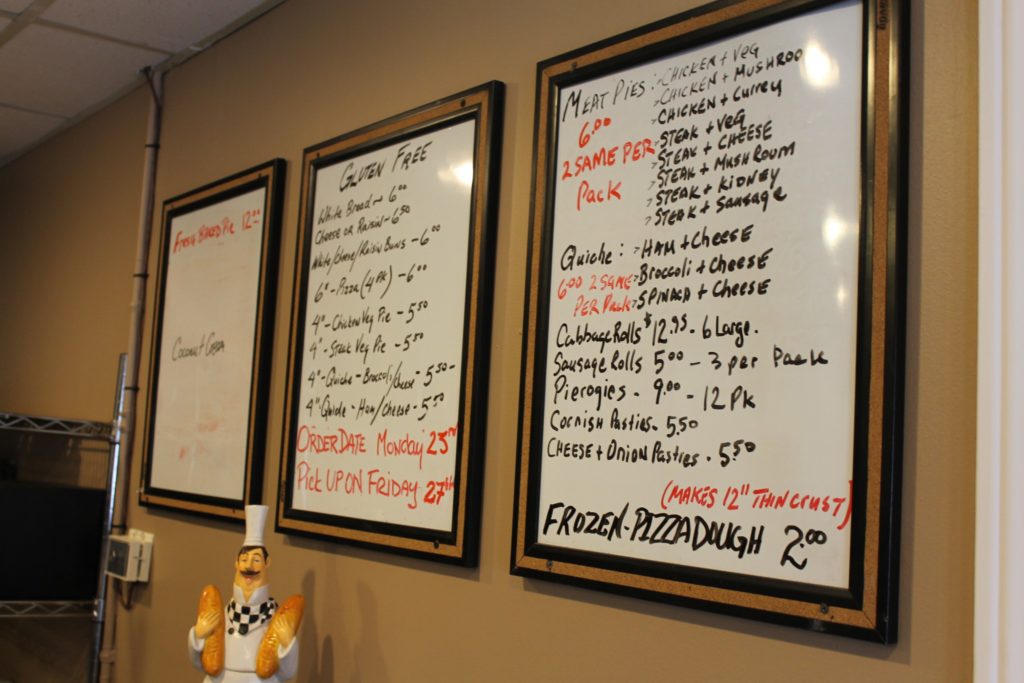 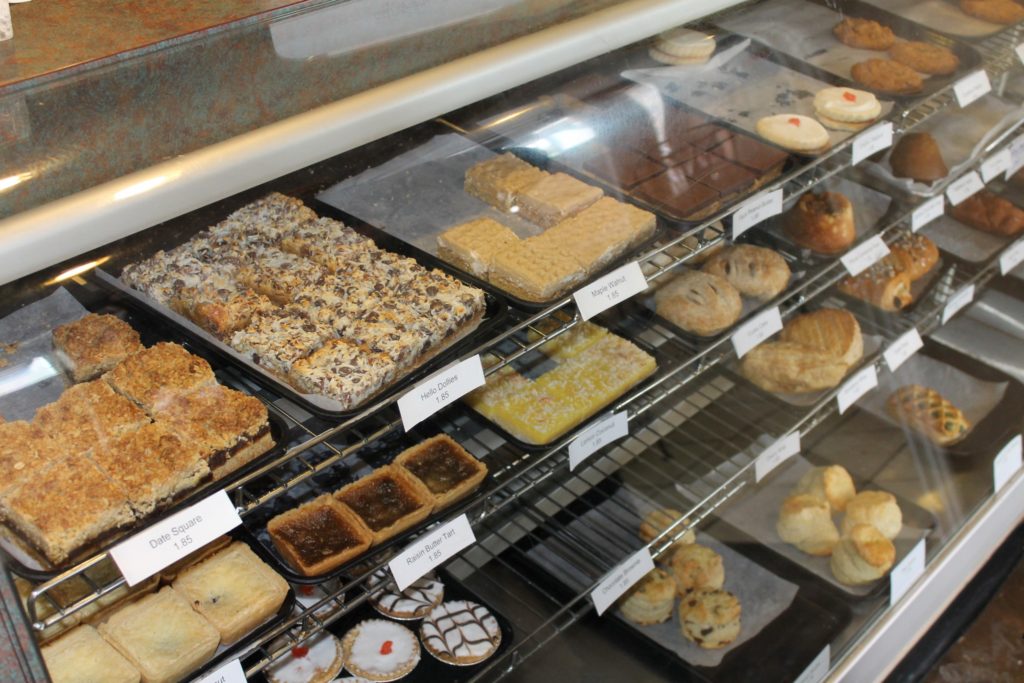 Our next stop was Mossimo’s Pizza. Ken and I are huge pizza fans – if we could only pick one food to eat for the rest of our lives, it would probably be pizza. Mossimo’s has a mind-boggling selection of pizza. And wings. And subs. They even have Pizza Fries. Sounds like Italian poutine to me, and I love poutine.

Stomachs growling, we perused the menu. 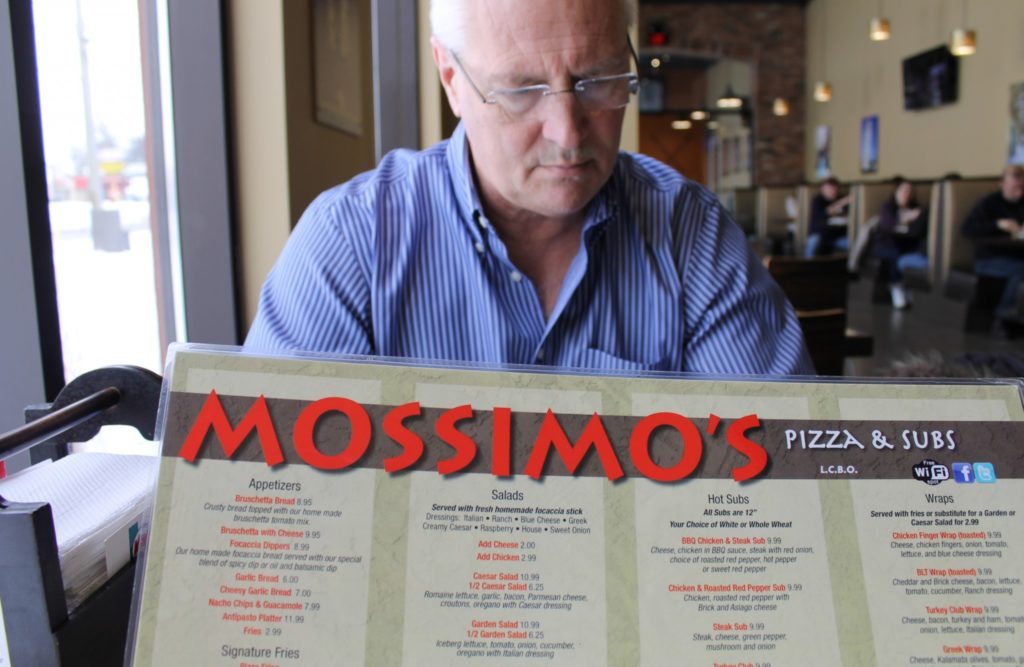 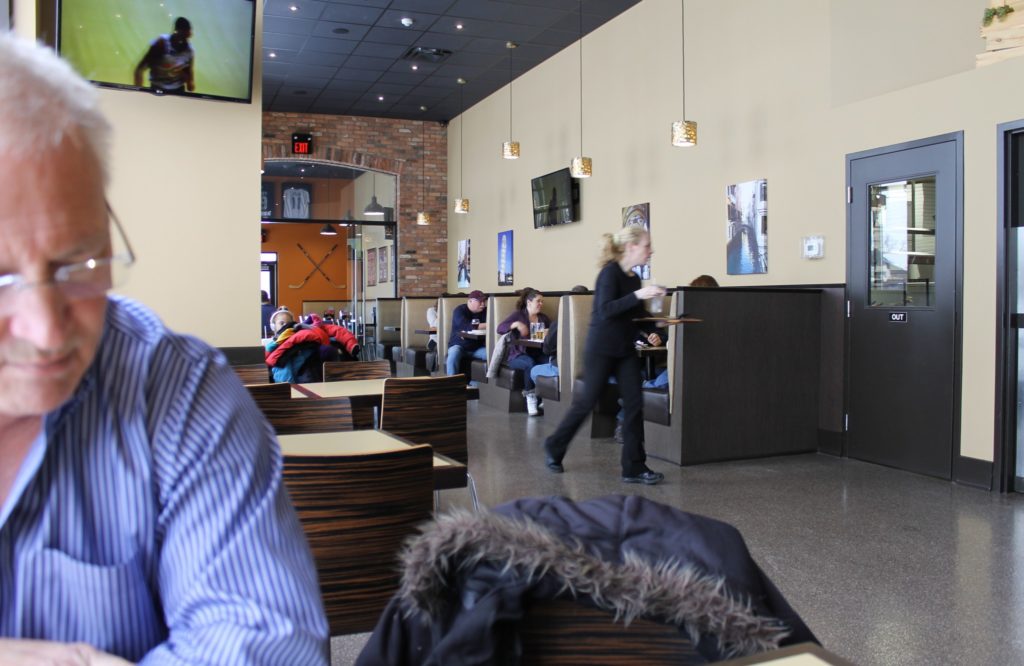 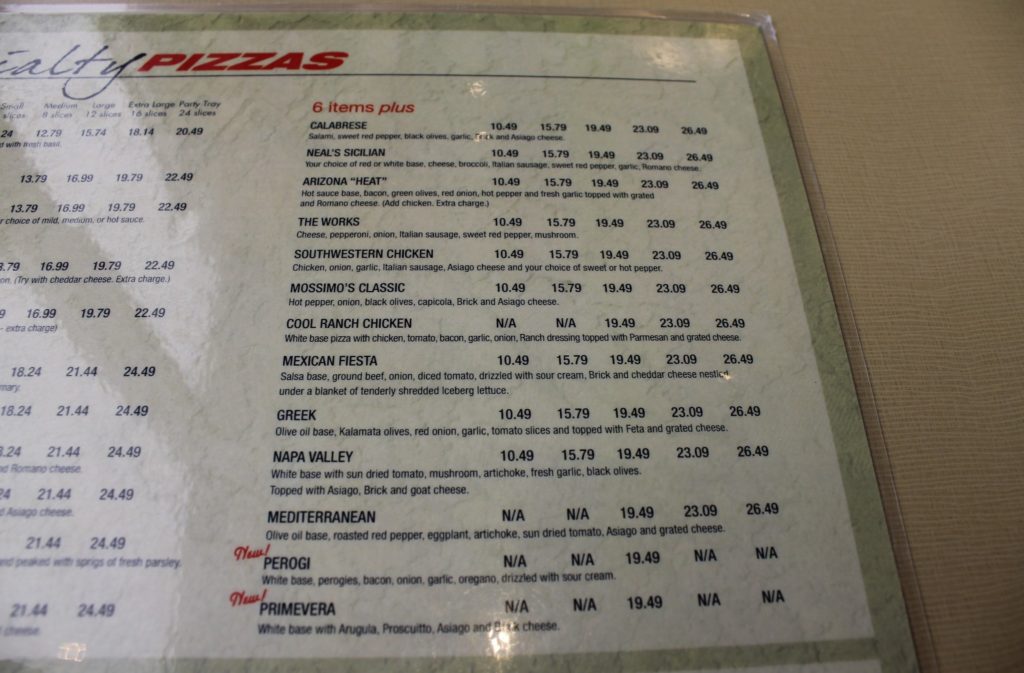 (Notice the Perogi pizza?? I am going to have to try it someday, just for the novelty)

I could not decide what to order. Our delightful waitress told me she could make my selection easier. I could have two types of pizza, half and half. Now this impressed me, but I was a bit skeptical. Often when I order pizza, there seems to be some confusion when you say “Olives on half please”….they either forget the olives, or dump them on the whole thing. And that is only with one ingredient! Mossimo’s was offering TWO completely different pizzas on one. So I went for 1/2 Calabrese (salami, red peppers, black olives, garlic, brick and asiago cheese) and 1/2 Southwestern chicken (chicken, onion, garlic, Italian sausage, asiago, red pepper). Ken chose 1/2 Meat Lovers (cheese, pepperoni, ham, bacon, Italian sausage and rosemary) and 1/2 The Works (cheese, pepperoni, onion, Italian sausage, red pepper, mushroom). I was impressed Ken ordered a pizza that had rosemary on it. He has this wierd thing about certain herbs, and rosemary is one of them.

Anyway. Look at this delicious thing of beauty. 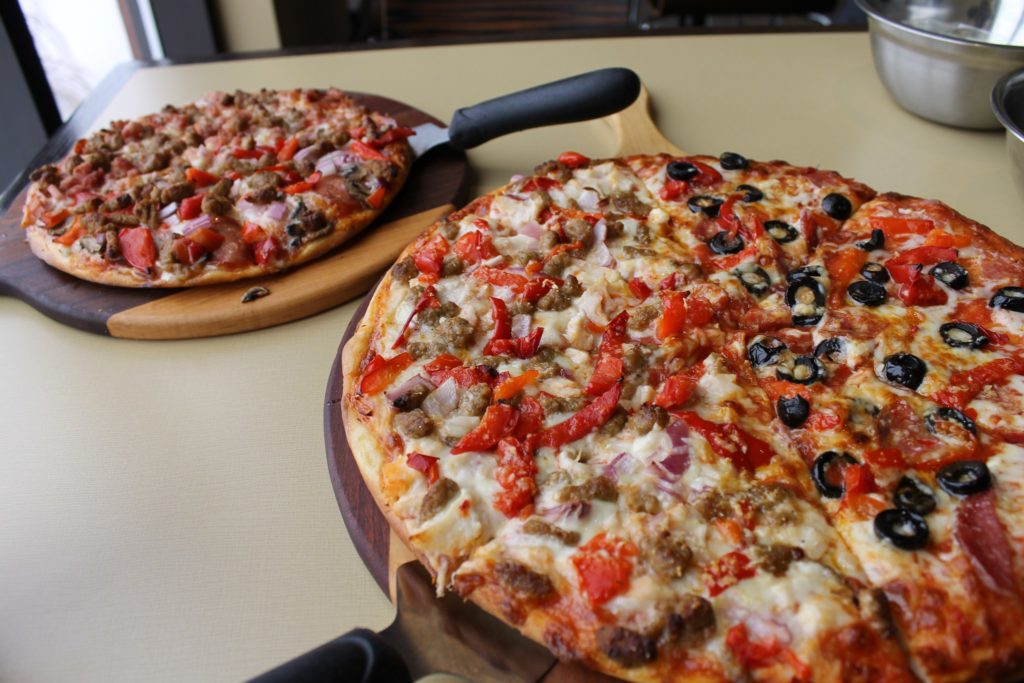 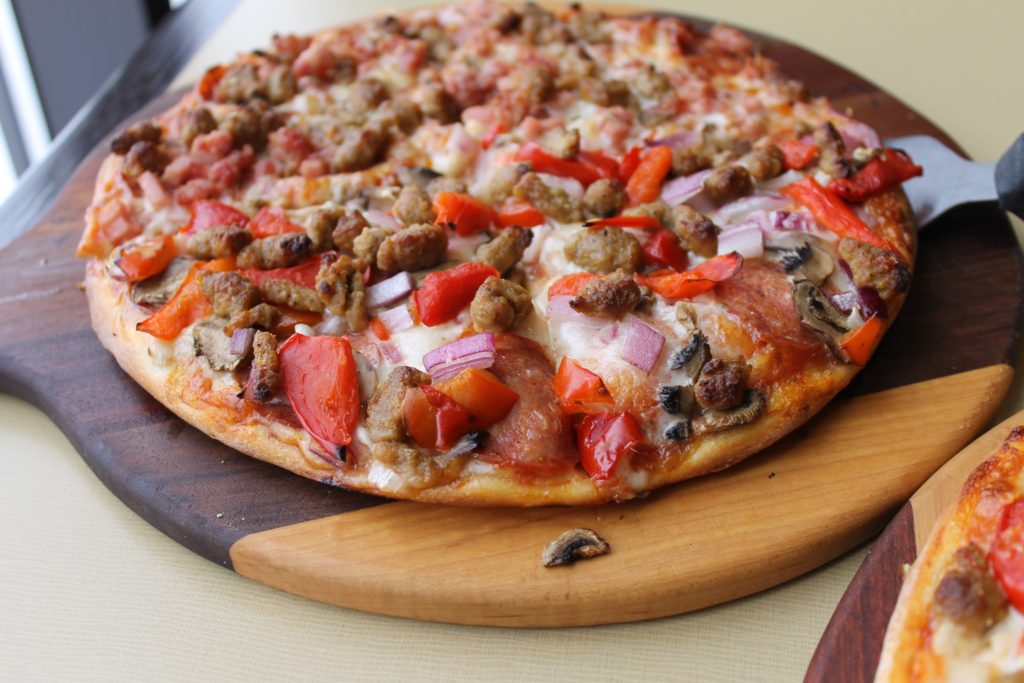 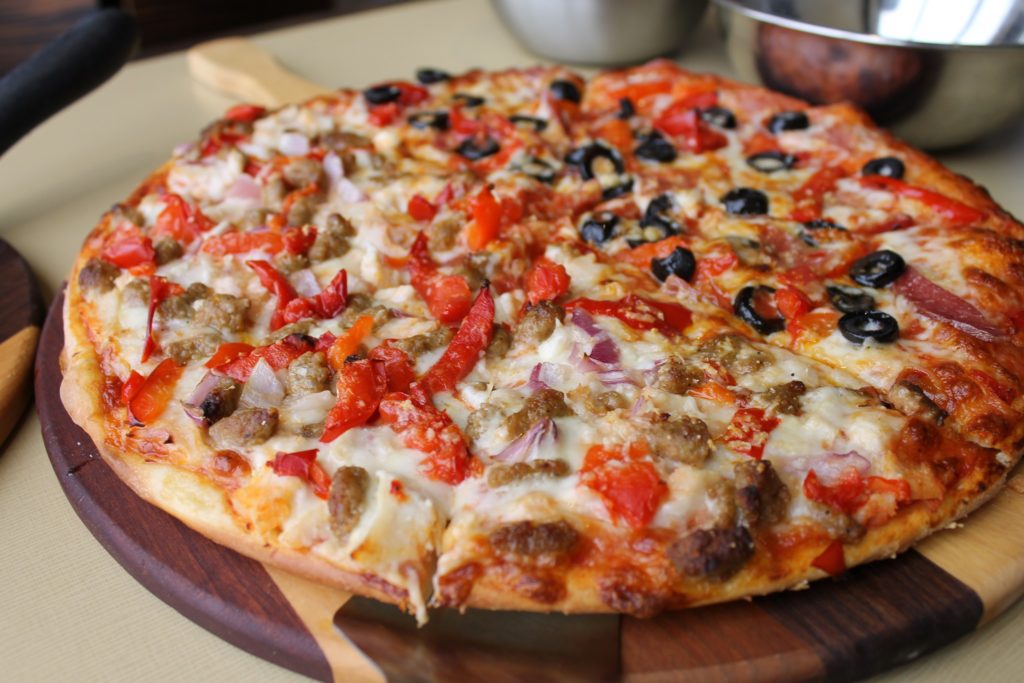 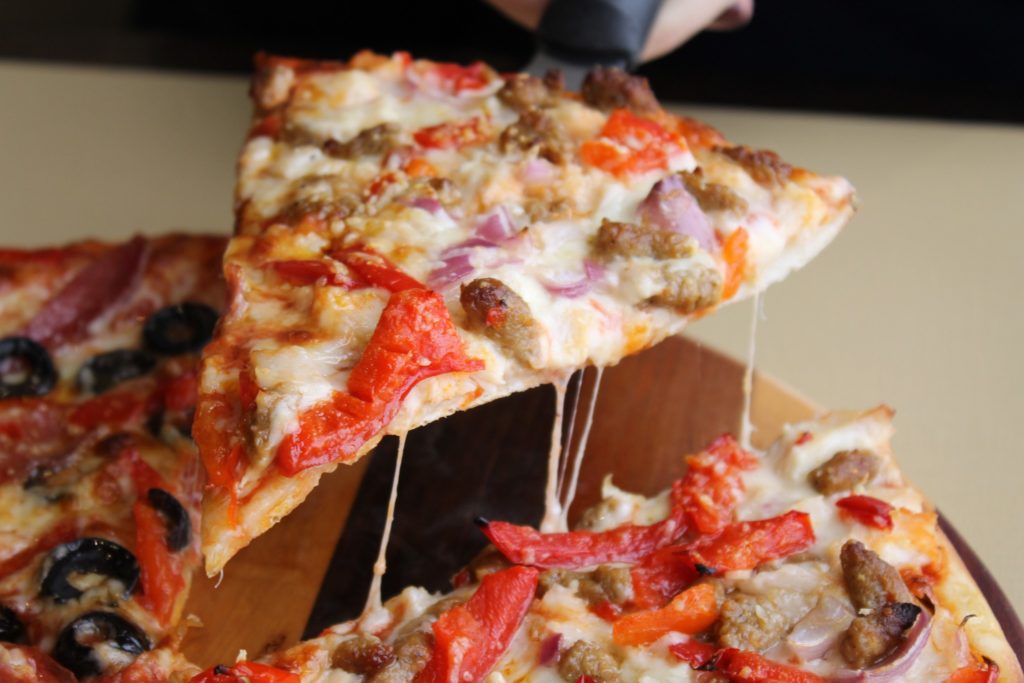 Our pizzas came exactly as ordered, no mix-ups, missing ingredients or the like. And with really wonderful flavour.

I also ordered wings, and was allowed to mix and match the flavours for them too. I went for Montreal Steak Spice, Teriyaki, and good old Mild. I liked the Teriyaki wings the best. Wings aren’t really that photogenic, but here’s a shot of the Teriyaki ones 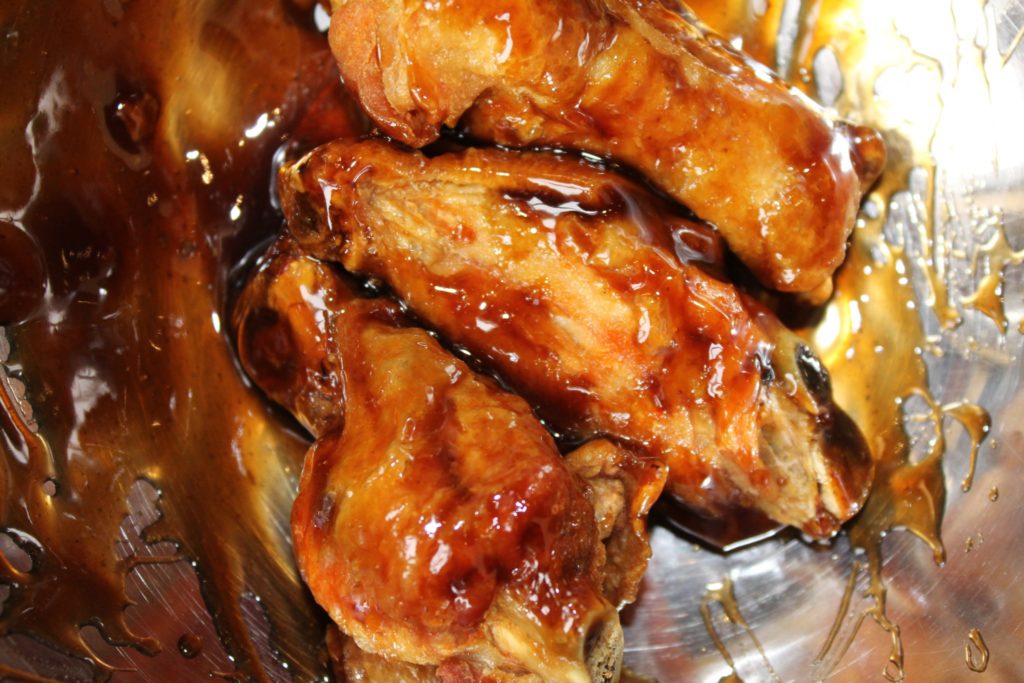 And the mild ones 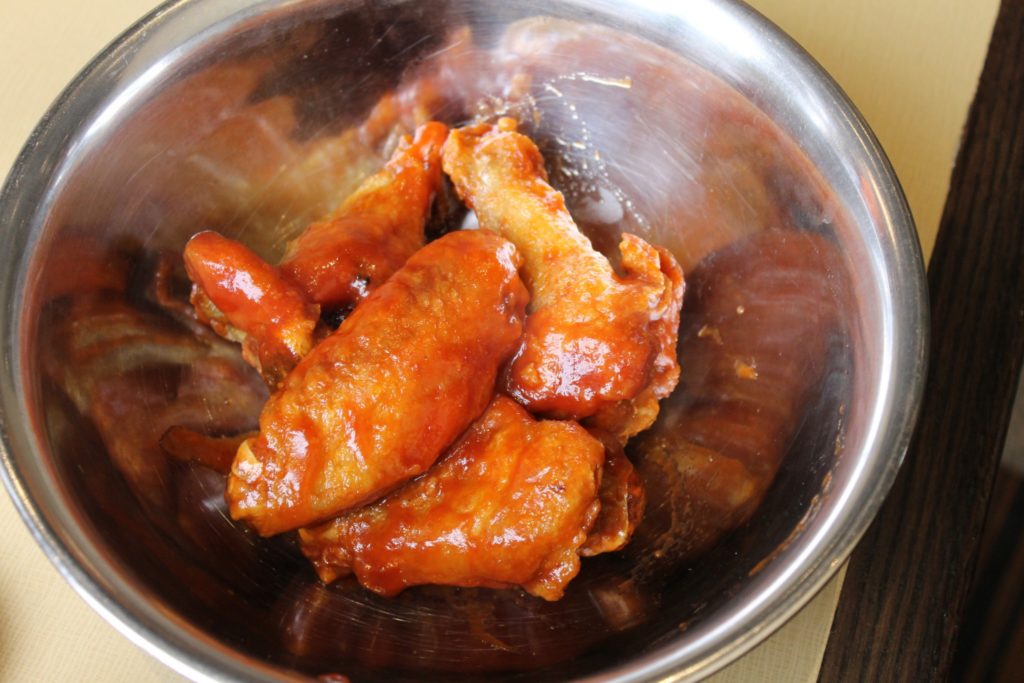 Now I will be very honest here. I am not a huge wing fan. I think the reason why is because so many places actually overdo the sauce, in my opinion. You spend most of your time slurping sticky sauce off your fingers, trying not to get it on your clothes, and foraging madly for napkins. (Why do most places only give you two puny napkins when you order wings?? I know there is a cost involved, but really…) A couple of my friends like that about wings, think that’s part of the fun, but not me. However, since Mossimo’s is also known for its wings, I had to give them a try.

I really liked them. There was enough sauce to give the meat delicious flavour, but it wasn’t so goopy that it was excessive. They also had a whole pile of napkins on the table for you to take as many as you needed – no napkin foraging required. The Montreal Steak Spice wings came tossed in the spice, but there was no sauce on it. I found you lost some of the spicy flavour because of that, but the non-sticky finger result was a good one for me.

The following day, I decided to Tweet about my pizza goodness. I looked Mossimo’s up on Twitter, and they said they delivered EVERYWHERE. So I tweeted a question “Does that include Niagara-on-the-Lake?”. And glory be, they said yes.

This is cause for much rejoicing. Maybe this is too “Toronto-girl-snobby” of me, but I can’t believe that it is so difficult to find delivery in Niagara-on-the-Lake. Several places do take-out, but some days I really want the decadence of delivery. We were excited when we got a flyer saying that Pizza Pizza now delivered to NOTL. We called, and they said they could not find our street on their map of NOTL, so they could not deliver to us. Ken was in shock. We even called back, thinking maybe the first employee just made an honest mistake. But nope. No delivery for us, even though they “now deliver to Niagara-on-the-Lake”.

Huhh???? Can’t find our street on the map?? Somehow our B&B guests find us. Somehow packages get delivered. But not Pizza Pizza.

I’m sure Mossimo’s will find us! And I’m so glad I found them.

Fully satisfied, we headed out for the rest of our afternoon in Pelham. Our remaining stops were terrific, our time in Pelham so enjoyable, that the rest of the afternoon is another post in itself.

How were your weekend adventures? 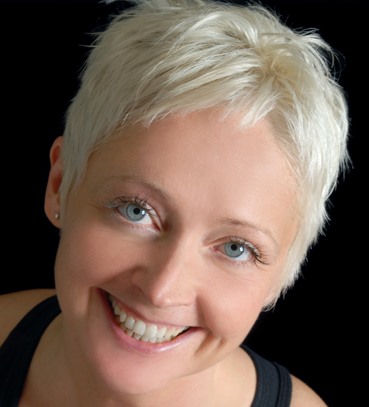 About the Author Joanne Deall

Joanne Deall decided to leave the chaos of the big city of Toronto to follow her dream of life in Niagara-on-the-Lake. When she is not busy running her Bed and Breakfast, Highbrook, she loves to write about life in Niagara. Follow her adventures on niagarabuzz.ca as well as at www.niagarafied.ca.