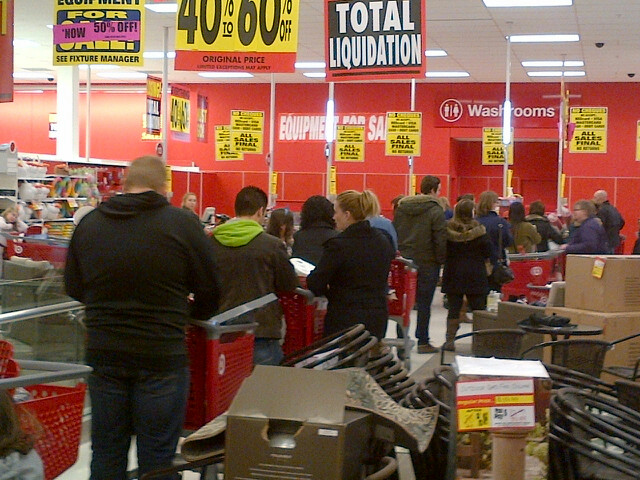 Target continues its “farewell tour” with 13 stores across Canada closing yesterday (Sunday) including: the location in Niagara Falls on Morrison Street. Others include the Appleby Line location in Burlington, Oshawa and Kitchener.

The discount retailer also has locations at the Seaway Mall in Welland and the Pen Centre in St. Catharines which are reported to be open until May.

We checked out the sales at The Pen yesterday and things were pretty picked over and busy. (40% off ticket prices was the general rule of thumb…just enough to “sort of” make you want to buy something). Long lineups and lots of empty shelving were the norm everywhere in the building that once housed Zellers.  A bit sad… The discount retail chain racked up billions in losses since opening a couple of years ago and lost almost $2 billion in two years causing them to pull the plug in January.

Around 150 employees are affected in St. Catharines and the Niagara Falls locations while the Welland store employs around 110.

Locally, Target has been here since 2013. All three locations required massive renovations costing around $10 million bucks.