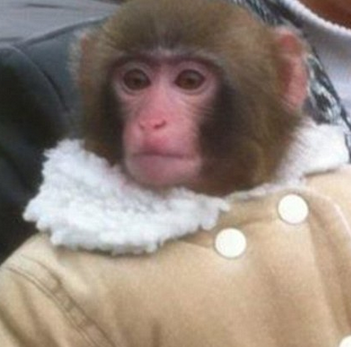 Darwin, dubbed the “Ikea monkey” — whose story went viral in December 2012 when he was found wandering outside an Ikea store wearing a shearling coat — has been living at Ontario’s Story Book Farm Primate Sanctuary ever since a court placed him in its care.

The  Sunderland, Ontario Sanctuary has been trying to raise money for a move to new premises since late last year but says donations have dried up and “the situation is desperate” and they will be evicted from their current premises on June 30.

The sanctuary is appealing to the public as it seeks to raise $250,000 to give Darwin and his fellow primates a new home.

Darwin is mentioned by name in the sanctuary’s latest call for financial help, but Story Book notes it houses 20 monkeys in total.

Darwin became something of an international celebrity after he escaped from a crate in his owner’s car parked in a Toronto Ikea parking lot and then was pictured wandering around in his little brown coat.

Animal services  sent him to Story Book while his owner, Yasmin Nakhuda tried to sue the sanctuary in an effort to get him back but an Ontario Superior Court justice ruled that Darwin was a wild animal and that Nakhuda’s ownership ended with his escape from her car.

Darwin’s owner tried to appeal the ruling but later changed her mind, saying it was too costly and had little chance of success.

What do you think? Should the little guy just be allowed to go back to his original owner?