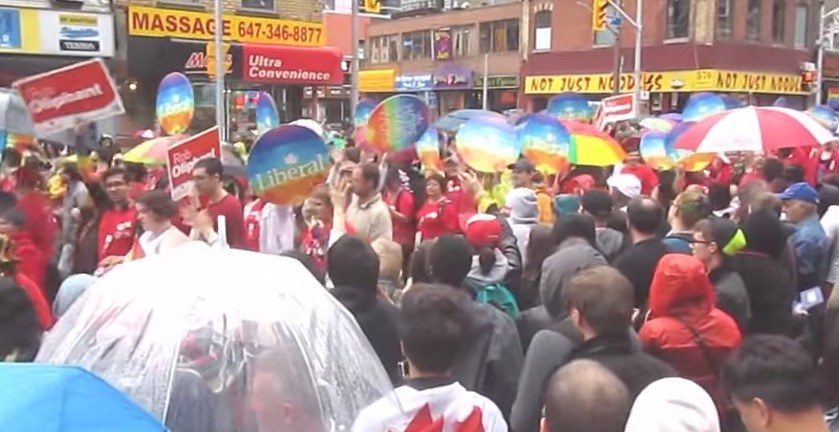 There was no raining on this parade.  Hundreds of thousands attended the 35th Pride Toronto parade yesterday which was themed “Come Out and Play” as it made its way  on Yonge Street.

The diversity of those who were there was across the board.  From Olympic athletes to politicians (among those marching in Sunday’s parade were federal NDP Leader Thomas Mulcair, Liberal Leader Justin Trudeau, Ontario Premier Kathleen Wynne, PC leader Patrick Brown and Toronto Mayor John Tory)….everyone was there, wearing everything from uniforms to bondage wear. In the U.S., rainbows were also out  Sunday as hundreds of thousands of people packed gay pride events from Chicago to New York City, where the governor officiated at a wedding, just days after the U.S. Supreme Court’s landmark ruling legalizing same-sex marriage.

Gay pride or LGBT pride is the positive stance against discrimination and violence toward lesbian, gay, bisexual, and transgender (LGBT) people to promote their self-affirmation, dignity, equality rights, increase their visibility as a social group, build community, and celebrate sexual diversity and gender variance. Pride, as opposed to shame and social stigma, is the predominant outlook that bolsters most LGBT rights movements throughout the world. Pride has lent its name to LGBT-themed organizations, institutes, foundations, book titles, periodicals and even a cable TV station and the Pride Library. Ranging from solemn to carnivalesque, pride events are typically held during LGBT Pride Month or some other period that commemorates a turning point in a country’s LGBT history, for example Moscow Pride in May for the anniversary of Russia’s 1993 decriminalization of homosexuality. Some pride events include LGBT pride parades and marches, rallies, commemorations, community days, dance parties, and large festivals, such as Sydney Mardi Gras, which spans several weeks.

Common symbols of pride are the rainbow or pride flag.