Christmas Card Goes Viral for all the WRONG REASONS 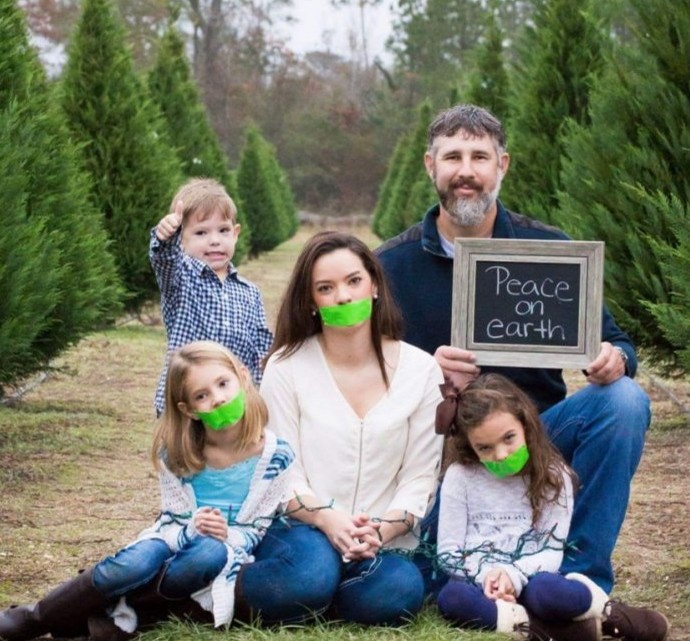 In another what were they thinking moment…..this photo, taken by Louisiana-based Hannah Hawkes Photography, shows a family of five in which the mother and her two daughters are bound by Christmas lights and have bright green duct tape over their mouths. The father, who is kneeling behind his wife and daughters, is holding a sign that reads “Peace on earth,” while the young son is giving a thumbs-up.

After the photographer posted the photo Dec 13 on the photography business page it went viral and received major backlash in the process with some calling it sexist, creepy, offensive and even promoting the silencing of women.  Some found it humourous, buy they were few and far between.

The result? After being served up with “very hateful and vulgar comments,” the photographer posted a response on Facebook, defending the photo. “I would like to say that as a female I do NOT and have never promoted violence to women!” she wrote. “I do not support abuse, or the degradation of women. My controversial photo was taken by request by the family, and was in no way meant to promote abuse.”

She added: “This photo was taken with humor in mind, and was meant as a comical Christmas photo. I personally know this family, and have known them for many years. They are not abusive to their children in any shape or form. Also, I would like to add that no one was harmed during the process! So everyone have a very MERRY CHRISTMAS and MAY GOD BLESS you and yours!”