QEW Toronto Bound will be closed until at least 2 p.m. 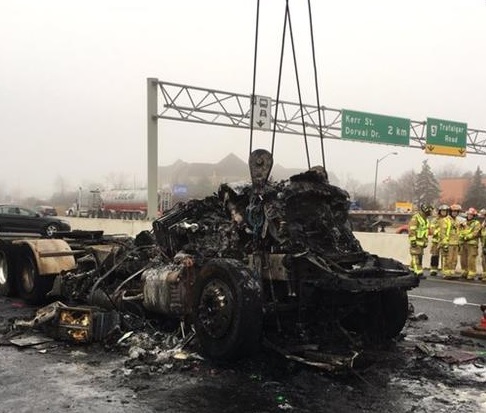 QEW at Trafalgar Rd. Oakville will remain closed until approx 2pm for repaving after an overnight fatal collision and fire according to OPP.

According to police, two people are dead and another suffered minor injuries following a four-vehicle crash on the Queen Elizabeth Way in Oakville on Tuesday evening.

The OPP say two trucks were involved in the crash in the Toronto-bound lanes of the highway near Trafalgar Rd. One truck was an empty flatbed and the other was a tractor-trailer believed to be hauling car parts that burst into flames after the impact just after 9 p.m and investigators are on scene.

Police have not yet released the victim’s name or age. All Toronto-bound lanes of the busy highway were closed at Trafalgar Road around 9:30 p.m. Provincial Ministry of Transportation cameras showed a large truck on fire on the highway about that time.

Provincial police indicated that the highway would be partially closed for approximately 8 hours.

Next post Serious Collision on Victoria Avenue Sends One to Hospital