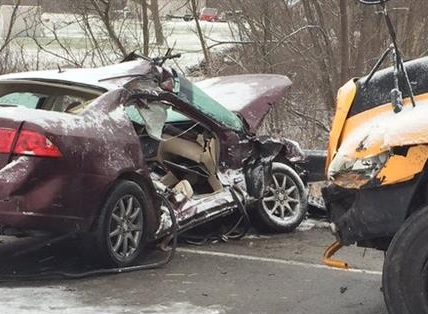 Police say,  at approximately 7:22 AM on Thursday, January 28th, 2016, the Niagara Emergency Medical Services, Niagara Regional Police Service and Thorold Fire Services were dispatched for a collision involving an automobile and a school bus on Regional Road 20, also known as Lundy’s Lane, between the Alanburg Bridge and Highway 58 in the City of Thorold, in the Region of Niagara, Ontario.

Initial investigation revealed that a 29-year-old male resident of Niagara Falls was driving a 2007 Buick motor vehicle westbound on Regional Road 20 when he lost control of the motor vehicle and crossed into the path of an eastbound 2009 International school bus, being driven by a 64-year-old female resident of Thorold. The front of the school bus collided with the passenger side of the Buick, causing extensive damage.

There were two passengers in the Buick. A 24 year old female passenger who had to be extricated from the front passenger seat by fire services, she was transported to hospital by air ambulance with life threatening injuries. The second passenger was a young child seated in the back seat. This child was uninjured in this collision and the male driver suffered minor injuries, but both were transported by ambulance to hospital.

There was only one female student in the school bus and she suffered minor injuries and was picked up from the scene by her mother.

The school bus driver also went to a local hospital by ambulance with non-life threatening injuries.
This collision remains under investigation by Detectives of the Niagara Regional Police Services Collision Reconstruction Unit.