It’s Easter Sunday! But what are we celebrating? 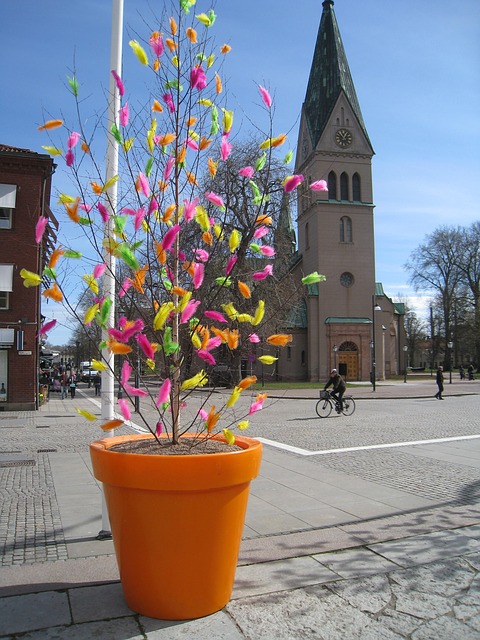 Bunnies, chocolate, egg decorating – what on earth is Easter all about? Easter Sunday falls today on March 27 this year, with Good Friday on March 25, and Easter Monday on March 28.

Why do we celebrate Easter?

Easter is a Christian festival which celebrates the resurrection of Jesus Christ.  According to the New Testament, Jesus died on the cross on Good Friday, and came back to life three days later.  His resurrection is celebrated on Easter Sunday, which also marks the end of Lent, the 40-day period of fasting which begins on Ash Wednesday. Maundy Thursday (Holy Thursday) is the Thursday before Good Friday and commemorates the Maundy and Last Supper of Jesus Christ with the Apostles. How are Easter dates decided? Why does the date move?

Well, the holiday is a moveable feast but it always falls somewhere between March 21 and April 25 every year. It’s calculated as the first Sunday after the first full moon following the first day of spring. The full moon is known as the Paschal (Passover) Full Moon. Methods for calculating Easter are fiendishly complicated, in a uniquely baffling synthesis of mathematics, astronomy and theology. Because Christians believe that Jesus was crucified during the Jewish Passover festival, Easter is marked around that time. But by the end of the 2nd Century different Christian groups were already marking it on separate dates.The landmark Council of Nicea in 325AD, which set out the core Christian beliefs in a single creed, also attempted to standardise Easter.

Since then it has generally been accepted as falling on the first Sunday following the first full moon after the spring equinox – which the Church approximated as March 21. Could Easter be held on the same date every year? The Archbishop of Canterbury has suggested that Easter should fall on the same Sunday every year. The Most Rev Justin Welby said that Anglican leaders would join discussions with other church leaders about the move to fix the date for the first time and put an end to almost 2,000 years of controversy.

The plan, which would schedule the Christian festival on the same Sunday each year…..hmmm….

What is with Easter Eggs?

Eggs illustrate new life, just as Jesus began his new life on East Sunday after the miracle of his resurrection. When eggs are cracked open they are said to symbolise an empty tomb. Originally eating eggs was forbidden in the week leading up to Easter (known as Holy Week). They were saved and decorated in the run-up to the celebration, and given to children as gifts. Sometimes they were coloured red, in recognition of the blood sacrificed by Jesus when he was crucified. Green was also used to symbolise spring re-growth after the winter. The first chocolate eggs appeared in France and Germany during the 19th century.

As chocolate-making techniques improved the modern Easter egg as we know it was born – and remain very popular (and yummy).

Where does the Easter Bunny fit in to all of this?

Rabbits and hares have been associated with spring since ancient times. It is thought that the Ango-Saxon Goddess of Spring, Eostre, had a hare as her companion, which symbolised fertility and rebirth. It’s hardly surprising that rabbits and hares have become associated with fertility as they are both prolific breeders and give birth to large litters in early spring….The legend of the Easter Bunny is thought to have originated among German Lutherans, where the ‘Easter Hare’ judged whether children had been good or bad in the run-up to Easter.

Over time it has become incorporated into Christian celebrations and became popular during the 19th century. Many children love to look for the Easter Bunny eggs which of course has given rise to the tradition of the Easter egg hunt which is still popular among children today. Why do we eat hot cross buns?

A hot cross bun is a spiced, sweet bun marked with a cross on top. They are traditionally eaten on Good Friday. The cross represents the crucifixion of Jesus, while the spices are said to remind Christians of the spices put on his body.

Hot cross buns appeared in the Oxford English Dictionary in 1733, but they have been around since before then. Enriched, sweetened bread dough dates back to the Romans. Long before Christianity, loaves and buns were baked with symbols on them, one of which was a cross. Small, spiced cakes were also baked to honour the Saxon goddess Eoestre, and to celebrate spring, but it was the Tudors who began to link the spiced currant buns we know today with feast days, celebrations and eventually Lent.
How is Easter celebrated around the world?

In many central and eastern European countries decorating eggs in beautiful patterns is especially popular. In Switzerland, Easter eggs are delivered by a cuckoo and a fox in some areas of Germany. The egg-giving tradition arrived in the United States in the 18th century brought by protestant German immigrants in the Pennsylvania Dutch area.

In the Republic of Ireland and in Northern Ireland it is a day of remembrance for the men and women who died in the Easter Rising which began on Easter Monday 1916.

So there you have it. A lot of traditions, a lot of answers to popular Easter questions and hopefully a little food for thought.