GOT A STORY?
Local BuzzPets

Abandoned and Abused Dog Looking For New Home at NFHS 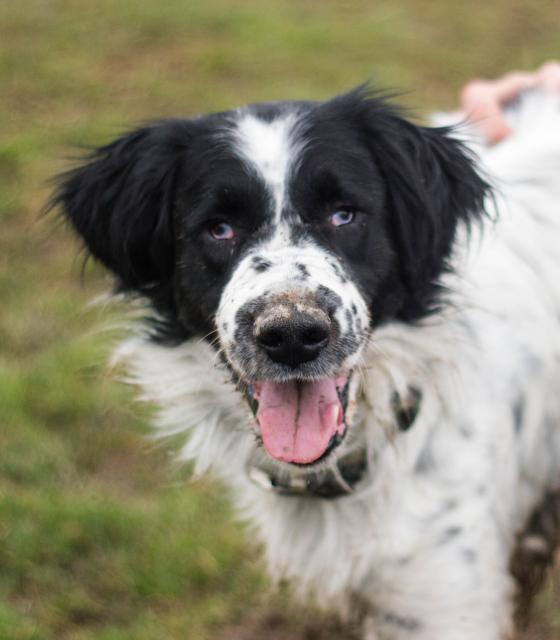 “There’s a confined stray in NOTL, the caller thinks it’s a drop off because the dog was trying to jump into passing cars and one clipped him”.

That’s already enough to break my heart, but what I encountered when I got there was much, much worse.  This dog’s body told a much darker, heart wrenching tale.  His poor muzzle, swollen with fur missing in strips, over and under, from whatever they used to tie his mouth shut.  His third eye lid in both eyes were half way up his eyes obstructing his view.  I guessed his age to be much older as well due to the fact that you could clearly see the advanced cataracts on the part of the eye that you could see.  Also the poor guy was so skinny!  Just fur over bones… and limping. Not sure of his temperament, and also the fact that he couldn’t see well, I used my happiest tone and said “ Hey buddy, how are you, my good boy”?  He responded immediately by wagging his tail so much, that his whole rear end was moving, at the same time broke out into a series of whining and grumbling that almost sounded like a story!  Once leashed, he jumped up on me and kissed my face.

After whatever realm of hell this poor being had been put through, he was still accepting me as a friend.  My heart hasn’t stopped aching since.

First of all, I will never know how people do terrible things to animals. I lose sleep over it on a regular basis.  But this poor soul  had a terrible condition that gave him super limited vision ,as I learned after his vet exam.  So the owners took their almost blind dog, tied his mouth shut and and dumped him off in the country…

This beautiful dog, after all that he’d suffered, has the amazing capacity to not just love, but trust?  I still can’t talk about it without getting emotional.

So that’s my boy. I’ve named him Charlie, and this is the story about how he came into the shelter and into my life.  There are no words to express how much he deserves his happily ever after!  Not just him but every lost and mistreated animal.

Charlie is going to need eye drops for the rest of his life and because of his lack of veterinary care early on in his life, he may develop glaucoma.  He’s going to need a family that’s prepared to meet his veterinary needs.  His muzzle will always be scarred  and appear swollen from the scar tissue, and last but not least… he needs healing for the scars on his soul. Sometimes when meeting strangers, mostly men, he responds by growling. I know it’s due partly to the lack of vision but also, probably something in his past.  He also has some food aggression, likely due to starvation.

Regardless of all that, I’m confident that the right home with love, vet care, patience and training will give him the happily ever after that he so richly deserves. Check out how loving he is below with Nathan at the Niagara Falls Humane Society! So please if you think you might be a good match for Charlie, please call or email the shelter, and if you can, make a donation to help Charlie and other animals like him. Phone: 905-356-4404.  The Niagara Falls Humane Society is located at:  6025 Chippawa Parkway Niagara Falls, Ontario.

Next post Niagara Food and Wine Expo this Weekend!

Previous post YUCK! Dust Mites and What You Need To Know Now