ARE WE PROGRESSING? DEPENDS WHO YOU ASK… 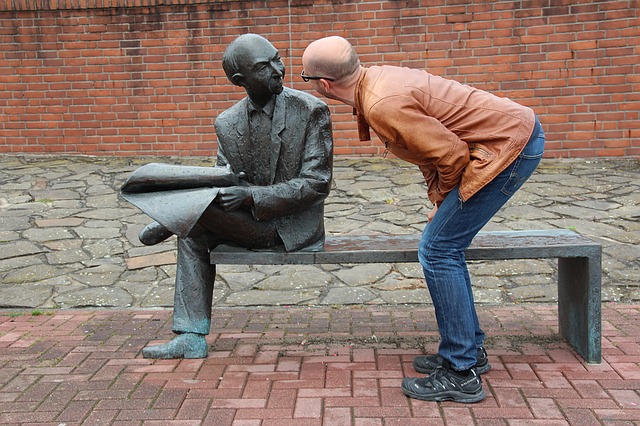 When I was 19, I was going nowhere fast…

My grandma decided to solve this problem by inviting Mormon missionaries over to her house to speak with my brother and I. My grandma, a devout Mormon her entire life, thought that joining the Mormon church would cause my brother and I to spend less time drinking beer and watching Shania Twain videos, and more time on productive activities (like possibly college).

It didn’t go over well.

I didn’t understand how believing in an abstract concept that I couldn’t see or touch would have any impact on my future.

My grandma’s response to multiple questions I had about the relationship between this abstract belief system and my daily reality was different versions of the following statement:

“You have to have faith.”

I grew up without any sort of “faith”, which has made my relationship with religion as an adult a difficult one.

That was one reason why it was hard to accept what my grandma was saying. The other reason was that I had seen what my parents had to do to leave poverty behind, and it was never about belief in a set of ideas that were hard to see, feel, or touch. My parents created change in their own life through hard work and very tangible action, like my mom’s decision to get her associates degree at night, or my dad spending months on the road to support our family.

What my grandma—who was just trying to teach me about the faith that had made her own life better—was telling me to do was to believe in something that didn’t seem to have any relationship with my life, and contradicted the reality I saw on a daily basis.

Economic Faith and a Long Run

I think of that day, and of “faith”, when I read about the forces impacting the American Presidential election, particularly the economics of traditionally industrial communities and working-class America.

When I think of “faith” in those communities, I don’t mean religious faith. I mean faith as it is defined, in secular terms, in the dictionary:

“A firm belief in something for which there is no proof.”

For more than three decades, rust-belt communities and working-class Americans—like my Grandma, who spent her entire 45-year career working in an Ore-Ida potato processing plant—have been told to have faith in two economic principles: trickle-down economics and free trade.

Trickle-down economics says that tax advantages for the wealthiest Americans will result in job creation and increased wealth for those on the lower rungs of the economic ladder. Free trade is supposed to result in higher-paying jobs for workers who have been dislocated because of outsourcing.

As political writer and Rolling Stone columnist Matt Talabai argues, despite being typically associated with opposing political parties, both trickle-down economics and free trade proponents rest their argument on the same principle: people need to have a little faith, because in the long-run everyone will be better off.

The reality is that many of us have been on a long-run for a very long time.

I thought of that this week when I read that Uber purchased Otto, a startup whose goal is to create a future where self-driving semi-trucks are a reality. While that reality is still years away, self-driving trucks will eventually automate millions of jobs. Automation is different than trickle-down economics or free-trade. It is not a theory or idea made reality by politicians. However, you don’t have to hang around the startup or tech community for very long—as I do on a daily basis—to know that concerns about an increasingly automated future are often dismissed using the same argument that supporters of trickle-down economics and free trade use: people need to have a little faith, because in the long-run everyone will be better off.

The difference is that trickle-down economics and free-trade are politics, and automation is “progress”.

Who defines the word “progress”?

If you are at the top of the economic ladder, and benefit disproportionately from trickle-down economics, it’s fair to say that you would call the implementation of that theory “progress”. And if you are Carl Ichan or Tim Cook, and the value of your Apple holdings depend heavily on using outsourced manufacturing labor, you would certainly call free trade “progress”. And even if many people hated you for it, on a personal level you wouldn’t be wrong.

On the other hand, if your community and family have been ravaged by the ills of disappearing jobs and economic hopelessness, you certainly wouldn’t call the last three decades “progress”.

And even if most academics disagreed with you, you wouldn’t be wrong.

If you are Uber, progress is a future without semi-truck drivers.

If you are my semi-truck driving uncles, progress might be a future without Uber.

The definition of progress depends on your perspective, which means that we need to have a global dialogue about what “progress” means.

It won’t be easy, given the enormous wealth and influence held by a small number of people as a result of trickle down economics, the fact that smartphones make nearly all of us a participant in some of the more brutal aspects of globalization, and the reality that automation will only continue to increase.

But what we can’t continue to do is keep telling people who end up on the wrong side of progress to just have faith that, in the long run, everything will be okay.

Next post HIT THE BEACH - WHERE TO SWIM SAFELY NOW IN NIAGARA!