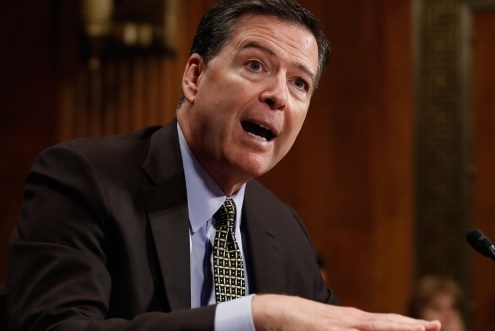 During a highly anticipated hearing, former FBI Director James Comey will give his testimony to the Senate Intelligence Committee at 10:00 a.m. ET today .

Comey was suddenly fired by President Trump in early May, in the middle of a widening investigation into possible collusion between Trump associates and Russia.

Comey confirmed (his detailed recollections of his one-on-one conversations with Trump were revealed yesterday in seven pages of prepared testimony), that President Trump requested his loyalty and later urged him to drop the investigation into ex-national security adviser Michael Flynn.

He went on to describe one meeting at the White House in which he said Trump strongly defended Flynn, saying that his former national security adviser “hadn’t done anything wrong’’ in his prior contact with Russian ambassador Sergey Kislyak. “I hope you can see your way clear to letting this go,’’ Comey said, quoting the president. “He is a good guy. I hope you can let this go.’’

Comey is expected to speak more on this encounter with the president, as well as at least nine others he outlines in his opening statement. Comey documented his meetings and calls with Trump immediately afterward in a series of detailed memos. When Trump fired Comey last month, the president effectively freed the former director to publicly air some of the most potentially damaging information to his presidency.

Next post WHY I WANT TO BE JUDGE JUDY FOR A DAY!