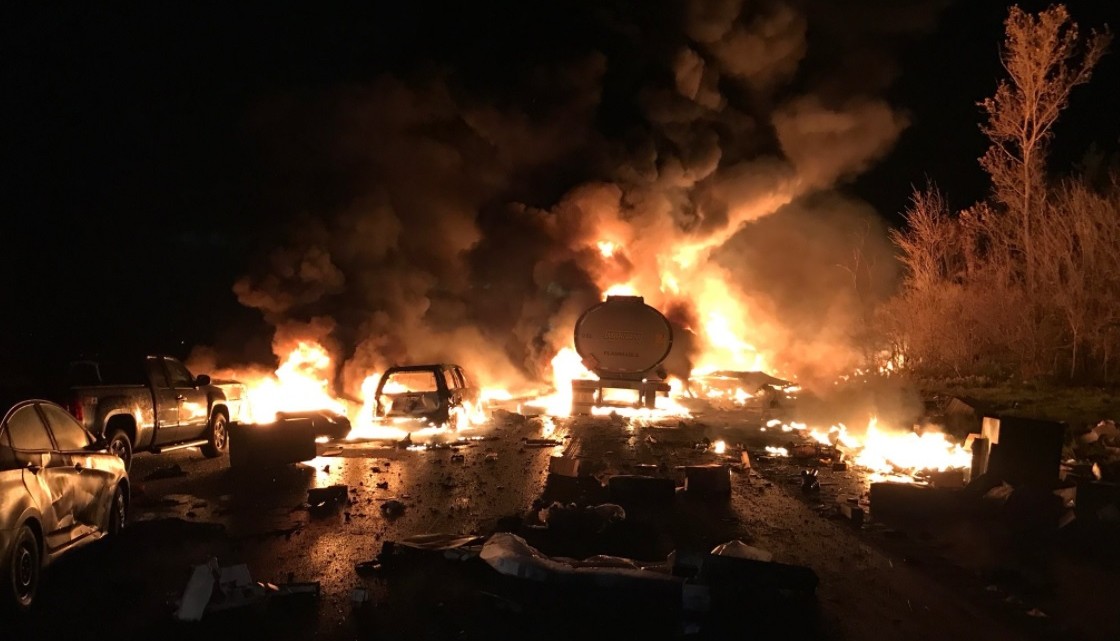 Police say that last night at about 11:30 pm a terrible crash on the 400 NB, just south of Barrie saw 14 vehicles collide into what was described on the scene as “massive fireballs and massive explosions” that reduced most of the vehicles to “shells” with “nothing left.”

It’s reported at least two fuel tankers and a number of other transport trucks were involved in the accident that took place  just north of Country Road 88. Currently the site where the multiple crashes took place is filled with twisted transport trucks, destroyed vehicles, and metal.  Two deaths have been confirmed thus far but the exact number of fatalities is still unknown and the death toll could rise.

Police were responding to another collision further north on the highway which created a slowdown when the pileup occurred. The cause of the crash is still under investigation, but an early inspection indicates that a transport truck may have collided into slowing traffic.

A witness at the scene reported that they saw one transport truck hit the back of another truck that was carrying vehicles, which led to a chain-reaction of crashes.

Both fuel trucks were “consumed by fire” following the accident and it took two-and-a-half hours before the fire was extinguished. All lanes of Highway 400 have been closed in both directions between Country Road 88 and Highway 89 as a result of the crash and police expect that that section of the highway to remain closed for the rest of the day.

The investigation into what factors may have played a role in the crash is still in its early stages, but they’ll be looking at the possibility of mechanical deficiencies in the vehicles, what the environmental conditions were like at the time of the crash, and whether or not human factors such as inattention, impairment, distraction or aggressive driving contributed.