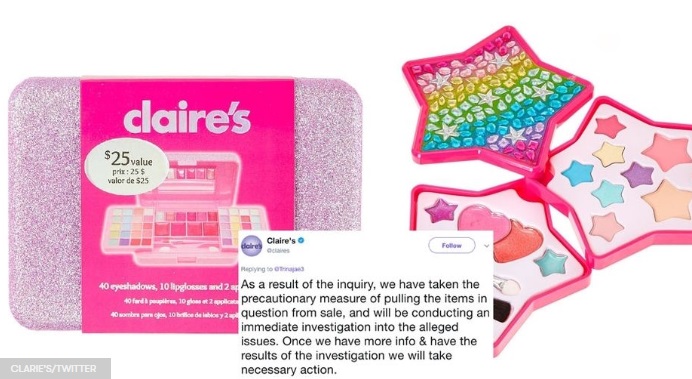 Retail chain Claire’s, a makeup and accessory store for young girls, has pulled certain makeup from shelves after a mother from Rhode Island found cancer-causing asbestos in her six-year-old daughter’s glitter makeup kit.

Kristi Warner who works at a law firm that handles cases involving contaminated cosmetics,  became concerned about the ingredients used to make her daughter’s glitter makeup purchased from Claire’s so she sent it to an independent lab for testing and discovered the makeup tested positive for tremolite asbestos, which has been associated with the development of a deadly form of cancer.

After Warner’s discovery, the store announced in a statement on Twitter last Saturday that they planned on recalling some makeup from its Claire’s locations and shared a complete list of the recalled products on its website.

But it was not just the one glitter makeup kit Warner’s daughter used that contained asbestos. The mother teamed up with her boss to purchase and test 17 more Claire’s makeup products from different parts of the country, which all came back positive for asbestos too.

Five days after Claire’s made its first statement, the brand announced it began conducting its own internal investigation to determine the accuracy of the claims Warner made.

UPDATE: Claire’s completed there own independent testing of the makeup products and claim everything came back asbestos-free.  The following is posted on Claire’s Twitter account:

Claire’s has listed nine products that have been removed from stores across North America: Next post Apple Admits to Slowing Down Older iPhones