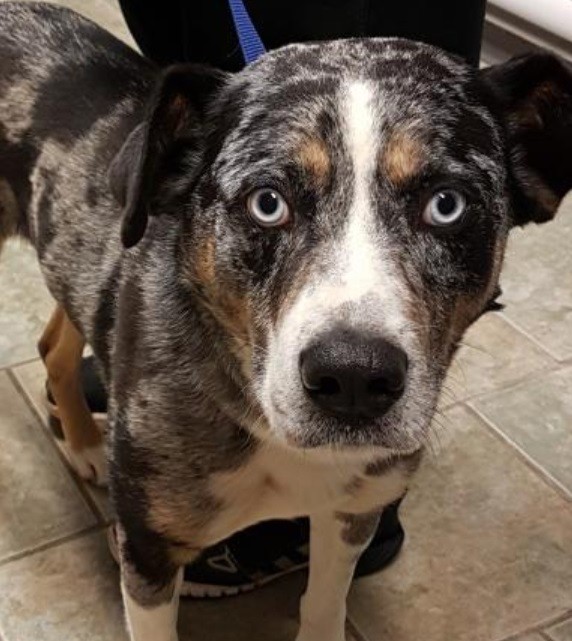 Main picture is Buster, a Catahoula Mix up for adoption now!

Does anyone else get the feeling that whenever you tell someone anything about your animal, they do the opposite?

Example one. “My cat doesn’t really like to cuddle.” Cat then proceeds to climb upon the guest, purring, head butting, and full on snuggling.

Below, beautiful Merlin has a special $60 adoption fee. Example two. You’re out to dinner at a family members house and you bring the dog. “He doesn’t really beg at the table.” You tell your family. HA! Look again because he has found the weakest link at the table and is currently working his magic and great big, puppy dog eyes to get a slice of meat. Little do you know, it wasn’t the first time.

Below, smiley Skylar is up for adoption now! My favourite is when it come down to the walk. I don’t know if you’ve ever had a new person walk your dog and told them, “Just be careful, sometimes he pulls on the leash.”

Below, Tuxedo cat Mooshoo!  What a charmer… Would you like to bet that was the same person your dog walked perfectly for?

I swear their main focus is to prove us wrong in as many ways as they can. Through contradictions and, if you’re a cat owner, mood changes.

When I was growing up we had a cat that was, admittedly, incredibly grumpy. But not with us. He would cuddle, cry for attention, beg and plead to be picked up, crawl onto your lap while you were reading because he couldn’t bear to be ignored. If it got him attention he was there. He wasn’t a shy cat and wouldn’t run away when new people came in. He just automatically didn’t like them.

One second he would be purring up a storm then swatting the newcomers if they went near him.

However the dislike was more so if he could see you. New people would approach him from behind to give his head a scratch and he would love it. Until he turned around and saw who it was. He didn’t love it so much after that.

Below, Bernadette would sure love a new home! But maybe that conflict he had with others was because he knew who his family was and how much we loved him. He knew where his safety zones were and who would protect him.

Don’t forget! April 27th is Trivia Night! Bring your team out for a night of fun!

For information on all animals up for adoption, please visit the Niagara Falls Humane Society’s main website: www.nfhs.ca