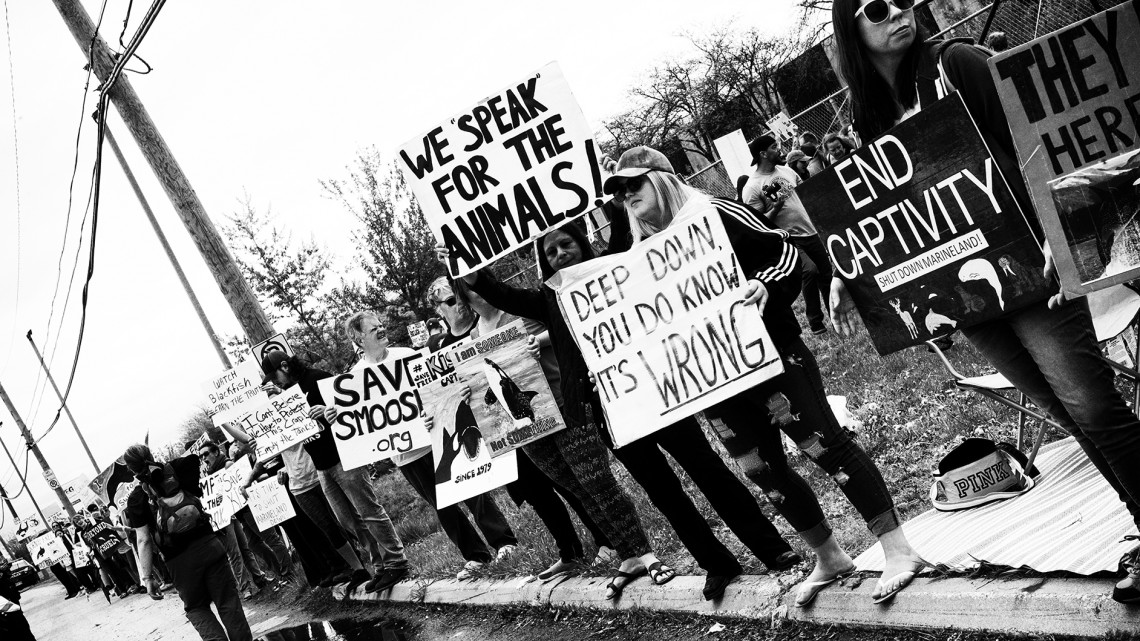 Main picture, protesters outside of Marineland on opening day, May 19th as families arrive at the venue.

About 350 protesters gathered outside Marineland in Niagara Falls this past Saturday as the attraction officially opened for its 57th season.

The gathering brought  like minded individuals together that don’t support animals in captivity and used for entertainment in what they believe is an abusive environment. On the “Marineland Demonstrations” Facebook page it reads as follows:

Marineland has announced they will open in 2018, so we will return as well to meet them with force.We were there in strong numbers last summer, watching families turn away, and some even picking up signs to join us on the RIGHT side of the fence, and we cant wait to see this amazing turnout again!

Below, the groups had tons of creative signs and messages as part of their peaceful demonstration… Because I was there first hand, I couldn’t help but notice that the families going into the venue on the whole seemed to pretend to be oblivious to the demo.  On the other hand, the reaction of passerby’s was mixed. There were many honks of horns of support and people rolled down their windows to cheer. Yet, there were a few that “flipped the bird” and shouted out indignations to the protesters. Regardless, in my opinion, changing one mind to think and act differently for what I believe is the “good” is well worth the effort put into marching and protesting . Niagara Regional Police were on site directing traffic for the duration of the four-hour demonstration. No incidents were reported.

An OSPCA investigation led to 11 animal cruelty charges against Marineland that were withdrawn in court last summer.

Carrie Lee is a photographer and publisher.

Next post SEARCH FOR MISSING WOMAN CONTINUES IN NIAGARA RIVER

Previous post BRACE YOURSELF FOR BUGS THIS SUMMER : Experts Weigh in...