LEAN ON ME – Fred Really Needs a Loving Home… 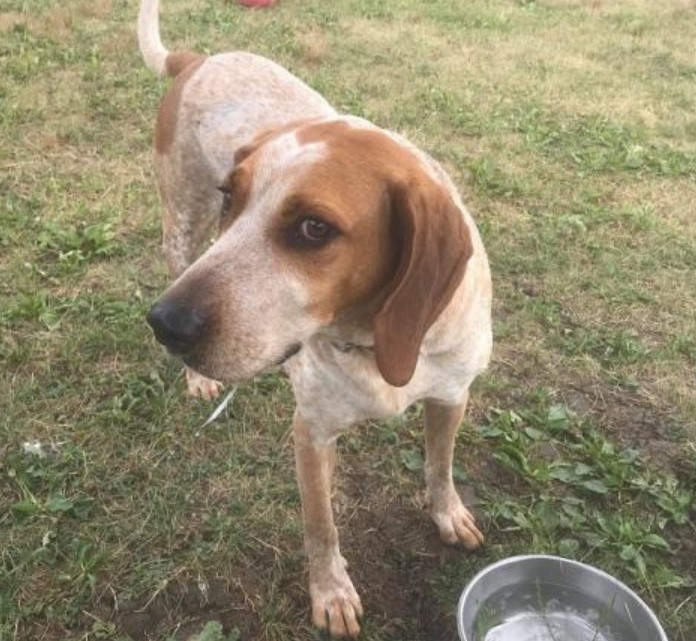 Do you want a dog who is medium sized, doesn’t shed too much, is easy going, laid back and good natured with people, then Fred is the dog for you!

Fred is a great dog who is having a hard time getting adopted. He’s been with us for a long time and was with us as soon as I started my summer coop at the end of June. Fred is a 5 year old, male, Red Tick Coonhound.

He has these beautiful big, soft, floppy ears that flap up and down when he runs. Fred has a red and white coat with beautiful markings on it. He was a transfer from the United States due to not being good with other animals. We aren’t sure how this happened but Fred unfortunately is a dog who does have some food and toy aggression. Every dog is not perfect and just like humans, they all have a flaw or two. When he’s outside I’ve noticed that he is afraid of garbage trucks and any loud noises. The poor guy shakes like a leaf. Fred isn’t the most sociable dog but after spending a lot of time with him since he’s been with us for a while, he has started to open up and loves to be pet. He definitely needs an owner who will always be there to comfort him and make him feel safe and protected. Being a hound, Fred adores to sniff as sniffing is a hound passtime. Coonhounds were bred to hunt raccoons, hence the name “Coon Hound”, and Fred has a very strong prey drive. He would be an excellent hunting dog (after some training of course) if you’re a hunter. Coonhounds have an incredible sense of smell as they fall on the top of the list for dogs with the best noses. Fred is well tempered who has a laid back personality who could watch movies on the sofa with you all day long. He loves to go on walks and enjoy exploring new smells of course but he isn’t super duper active and high energy.

Like most Coonhounds, Fred is very intelligent so keeping him mentally stimulated and challenged is essential and will only benefit him as well as creating a stronger bond with him. Stubbornness is common in this breed so it is important that Fred’s potential owner is strong and is willing to put in the work with training him and giving him discipline. It would be best for Fred to be the only animal in the house as he isn’t good with other dogs and due to his high prey drive, cats and other small animals wouldn’t be a good choice for a hound like Fred.

Whenever I go to take Fred out he always looks at me with those sad puppy eyes of his. Its breaks my heart how he always looks so sad and shows how badly he wants a forever home with a person who will love him unconditionally for his entire life. Fred is eagerly waiting for his special someone who will be devoted to him and be willing to do everything for him. A little extra maintenance is never a bad thing, especially when it comes to a wonderful dog like Fred.

If you are interested in Fred, he is at the Welland Humane Society! You won’t regret meeting this special Coonhound! A special $150 adoption fee applies for this sweetheart!  For more on Fred, please visit the link HERE.