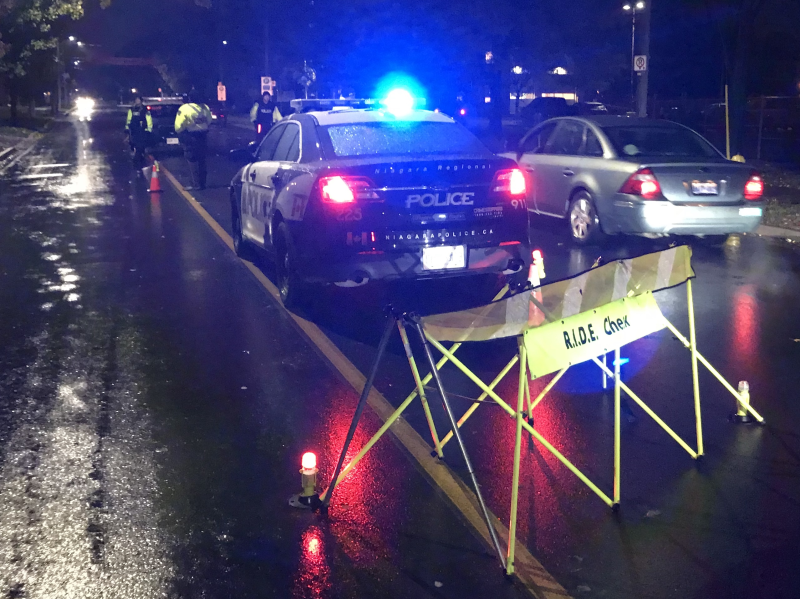 The first R.I.D.E. checkpoint was conducted in St. Catharines where four drivers were required to provide samples of their breath into an approved screening device. All four drivers were found to be within the legal blood alcohol limits.

One driver, acting as a designated driver, entered into the checkpoint with several passengers in his vehicle. An unsealed bottle of liquor was observed between the rear seats of the vehicle. After it was confirmed that the driver had not consumed any alcohol, he and his passengers were educated regarding the proper storage of unsealed liquor in a motor-vehicle as per the Liquor License Act.

Numerous vehicles entering the downtown area were being driven by designated drivers, or were properly licensed taxis carrying fares. Police appreciate the responsible behavior of those members of the public who wish to enjoy a night of festivities without putting their fellow citizens at risk.

A second RIDE checkpoint was conducted in Niagara Falls. Three drivers were required to provide samples of their breath into an approved screening device. One driver was arrested for registering a “FAIL”. That driver was transported to Central Holding, and was subsequently released with a 3-day driver’s license suspension for having a blood alcohol concentration in excess of 50 milligrams.

Also at this location, one driver was charged under the Cannabis Act for driving a motor vehicle with cannabis readily available.

This initiative has been made possible, in part as a result of grant funding from the Ministry of Community Safety and Correctional Services as part of the Reduce Impaired Driving Everywhere (R.I.D.E) program.