GOT A STORY?
featured businessesFood & Drink 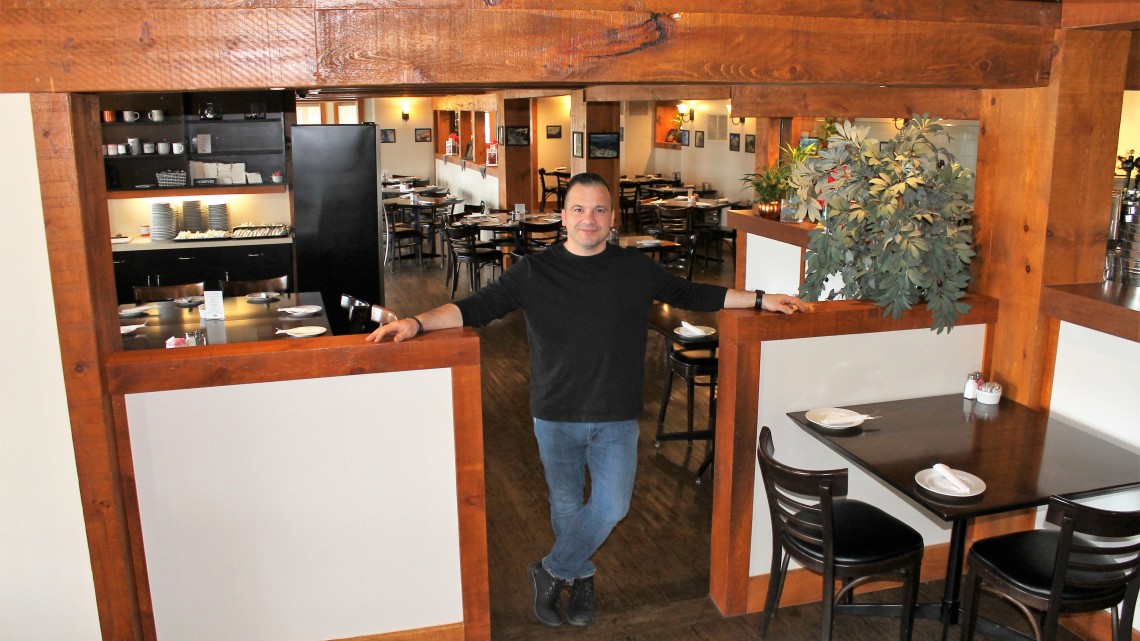 Since opening their doors in 2016, Georges Greek Village Restaurant in St. Catharines has been dedicated to bringing the highest quality and freshest authentic Greek cuisine to diners in the Niagara Region.

The journey for owner and chef George Kountourogiannis to this point has been a long but rewarding one. One full of uncompromising hard work, a passion for food passed down through the family and now the satisfaction of owning a successful restaurant that bears his namesake.

It all started in 1975 at the Pine Centre Restaurant in Thorold, where his mom and dad owned a family restaurant.

“I loved the restaurant business so much then, even as a kid that I would actually cry when my dad wouldn’t wake me up at 6:30 am in the morning to open it with him,” laughs George.

By the age of 12 the preteen was opening the eatery himself on weekends and as the years went by he continued to dedicate himself to learning the business.

Life became a combination of school and working in the kitchen that George fondly remembers. “It was our life, all my family knew was the restaurant business and we made a good living at it.”

But things changed, even as the once simple restaurant evolved into a renovated sports bar and dining lounge with a menu that started expanding to include Greek food.

George recollects in particular when the paper mill across the road closed down.  “The customers that had been our bread and butter vanished and so did our business.  So I took work at a rubber factory, still pulling part time shifts at the Pine, but eventually it made sense for my father to sell the business in 2000 as the economy continued to slide.”

Three years passed and the family all moved on until George’s father re inserted himself in the restaurant business by taking on part-time work in the kitchen at Joe Feta’s in St. Catharines.

One day in 2003, he was offered the chance to buy the business for himself, lease the Joe Feta name and rent out the existing Lake Street building, which he decided to do.

Enter 2006 and George’s father, knowing his son’s knowledge and passion for the food business floated the idea that he get back into the family food business again and join on full time.

“The timing was right, but I knew that if I came on board I would want to make some changes”, says George, “things that would modernize the business and take it to the next level.”

And that’s just what happened. Kountourogiannis’ keen business acumen saw him quickly buy new equipment and painstakingly rework procedures to maximize the quality and efficiency of the establishment and fine tune the business model.

Carefully considering his customers, he prioritized larger portion sizes, fresher food and a public relations campaign that saw the restaurant for the first time being broadcast on local radio and news advertisements.

The result? It paid off big time.

“Well you have to spend money to make money and this was a good example of it,” remembers George. “There were so many people that started coming in the door, we had to hire more staff to keep up with demand and it was incredible.”

By 2008 the business got a makeover and expansion with the opening of a large banquet hall that had originally been rented out to another retailer.

“People thought we were crazy expanding the floor space, but it was busy from day one and it allowed us to take on banquets.”

At some point in this journey however, George says a dream was starting to build in his mind. “You know, I always wanted to have my own restaurant and had even thought of the name George’s Greek Village!”

Add to that circumstances that included the lease agreement was not renewed, plus dining crowds that were exploding beyond what the current building facilities could handle and George knew it was time to leave Joe Feta’s behind and begin a fresh start somewhere else.

“We weren’t sure by 2013 if we were going to stay in the building we were in, so we started looking at potential properties for a new restaurant. We seriously considered two locations in St. Catharines, but then, I found out the old Frado’s Dining Lounge on Queenston Street was for sale and it needed a lot of work but we came to an agreement and the rest is history.”

Below: the original Frado’s Dining Lounge in St. Catharines

By August 2015, it was official with a real estate purchase on the banks of the Welland Canal that would see over a year in renovations and in Oct 2016 officially open its doors as George’s Greek Village. Today the 270 seat restaurant is the premiere go to Greek establishment in the Niagara region, packed to capacity daily with appreciative diners that have come to know and love the exceptional food and dining experience that is unrivaled in the community.

Below, diners enjoy the ambiance and food in the restaurant’s dining room and banquet hall… Overall says George, “It’s been an incredible adventure over the past two years. It’s been extremely hard work but so unbelievably rewarding. Sometimes in life it’s time to move on and I am so glad we did. I wouldn’t change a thing and I can’t wait to see what’s next.”

Ample parking make George’s a must visit for bus tours and tourist groups alike. During summer season, the patio can hold up to 40 people and features regular passing of the ships through the canal.

Previous post Stuff to do in Niagara for the Holidays!