Fighting Obesity with a Talking Scale?! 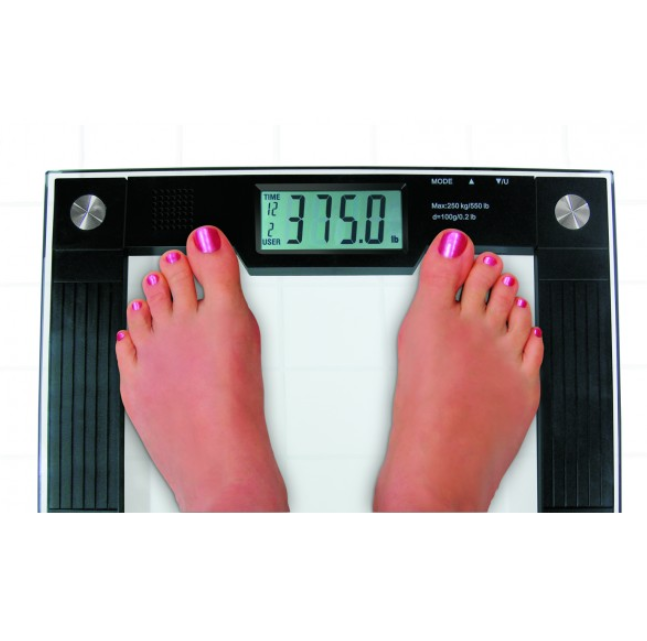 Are readers tired of me telling them that they should step on the scale every day? No one has said, “Enough is enough!” Besides, tons of readers evidently ignore my advice. Since the obesity epidemic gets worse year after year, is there any other way to convince readers that obesity causes Type 2 diabetes, heart attack and strokes? This week, here’s another idea to prevent these tragedies…

I discovered talking scales. I was so impressed with the smart innovation that I’ve placed a talking scale on my website. A voice from the scale might finally get this health message across before sickness strikes. Moreover, the right message on the scale could separate fact from fiction about obesity.

I’ve heard every imaginable excuse from patients to ignore their weight. Many have said to me, “I don’t need a scale. I’m aware I’m gaining weight when my clothes get tighter.” I usually reply politely that they’re wrong. But a voice from the scale could be blunt, saying, “Don’t fool yourself. This scale can detect increases of just half a pound. You never pay attention until you’ve gained thirty or more pounds.” Get smart and buy a scale.

Another common refrain I hear, “I’ve signed up for an exercise class to lose weight.” Or, “I’m walking more every day.” But the electronic scale would quickly inform you about the mathematics of exercise, and it is grim news. 10,000 steps daily, equals five miles, which only eliminates 500 calories! How many actually walk this distance anyway?

Obesity is a complex problem. Genetics often plays a role. But lifestyle is the primary reason for the current epidemic of obesity that leads to Type 2 diabetes, heart attack, and numerous other health problems. Some people argue that calories don’t count. But a scale quickly tells you that calories do count. And it should remind everyone that it’s time to say no to fancy desserts loaded with sugar, no to second helpings, no to “eat all you want” on the ship’s cruise, and to use your legs more.

I believe that a talking scale makes sense for several reasons. It’s not your doctor, friend or partner lecturing you. Rather, an innate mechanical device provides simple, unbiased information about obesity. Some people stick their head in the sand and never want to know the truth. But they’re heading down a dangerous road.

From my clinical experience, it’s true that genetics make it difficult for a few to beat obesity. But I remember a patient who sheepishly showed me an old picture of her at 200 pounds. Yet she was half that size! So I asked her the obvious question. How did she lose the weight? She explained she had always had a burning desire to be a jockey. And she had taken up the sport.

Motivation was the overriding factor in her success. She knew she would have to step on a scale before every race and would be disqualified if over the limit. So she had become an expert in reading the number of calories in packaged foods, and learning how to avoid them. She also knew how to do the math, that 3,500 calories put on one pound of fat. So, 500 calories fewer calories a day meant she would lose 52 pounds a year.

My advice is to get motivated like a jockey. See the talking scale on my website. The voice will immediately alert you to small increases in weight so there are no surprises. It’s foolish to die from obesity when a small step up on the scale can prevent it.

Talking scales are widely available. In Canada, to purchase a talking scale on Amazon:click here

Next post Police Warning About Bike Thefts in Niagara