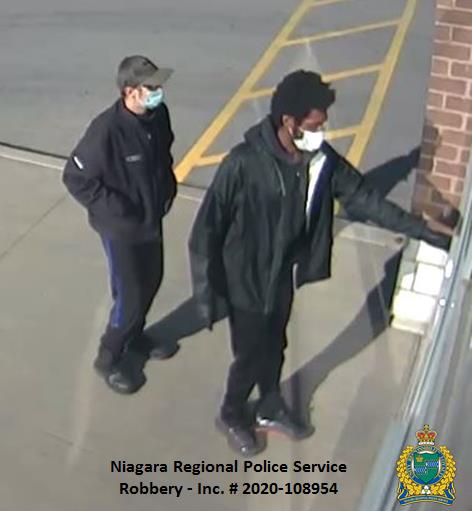 Police say they are investigating a robbery at a Telus Store in Niagara Falls where suspects made off with approximately $20,000 in merchandise.

On Sunday, November 8, 2020, at approximately 1:30pm police were called to the store at McLead Road near Montrose Road in Niagara Falls for reports of a robbery but the suspects had left prior to their arrival in a car. The initial investigation determined that two males had entered the store and threatened store employees while demanding merchandise.

The two male suspects left the store to a waiting white 4 door BMW car driven by a 3rd suspect.

The suspects stole in excess of $20,000 in merchandise including Iphones and Ipads.

No weapon was seen and none of the employees were injured.

District 2 detectives have now taken over the investigation, assisted by detectives from the Forensic Services Unit.

Suspect 1 is described as a black male, approximately 6 feet tall, with a slim build and wearing a black coat and hoodie, Adidas pants, black shoes, and wearing black latex gloves

Suspect 2 is described as a white male with brown hair, approximately 5’8 tall,  with a slim build and wearing an olive green Puma hat with a red sticker on it, black pants with blue stripe, sunglasses (with orange tint), black shoes, and wearing black latex gloves. See pictures below: The 3rd suspect who drove the BMW was not seen.

This investigation remains ongoing by detectives. Anyone who may have information or recognizes the suspects or suspect car is asked to call 905-688-4111, extension 9584.