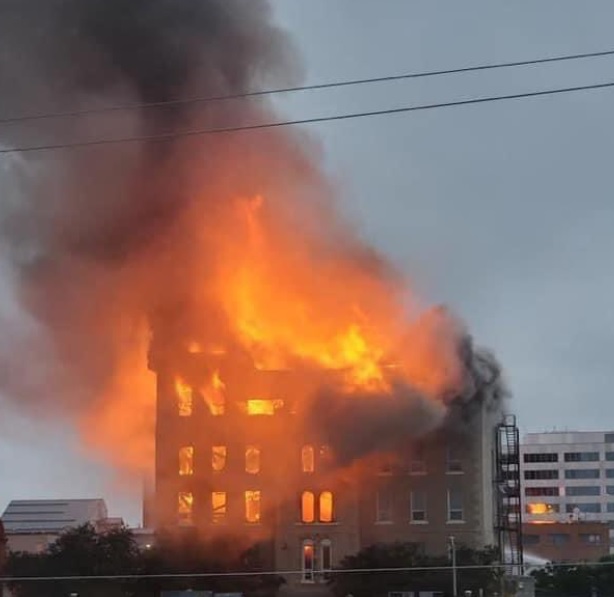 Fire Chief Jeff McCormick and Mayor Walter Sendzik  give an update to today’s devastating fire at the Welland House Hotel on Ontario Street.  Firefighters continue to battle the blaze and those living in the Yates Street neighbourhood, and those downwind, are being advised to continue sheltering in place this afternoon due to the smoke.

Individuals are asked to avoid the area as firefighters from St. Catharines, along with Thorold and Pelham – who are providing mutual aid, continue their efforts to fight the fire. Firefighters have been on scene since 5:23 a.m.

“We are still actively engaged in fighting the fire and will be doing so for probably most of the afternoon and into the evening,” Chief McCormick said during an update to local media at 2 p.m.

He said the shelter in place is a result of the way the smoke is blowing. Due to the significant cloud cover, he explained, the smoke is moving in a westerly direction due to the wind but hovering low in the neighbourhood.

Residents advised to shelter in place should always follow the direction of emergency responders and:

* Go indoors immediately and stay there
* Close all windows and doors
* Turn off furnace, air conditioners and other exhaust systems
* Close all vents and dampers

Members of the public are advised to avoid the area for their own safety, and the following road closures remain in effect in the area:

At this time no injuries have been reported, and firefighters continue a defensive attack out of an abundance of caution. Officials will determine the fate of the building, which was vacant, in the coming hours, depending on the structural integrity.

The chief said the cause and origin of the fire is under investigation. The Ontario Fire Marshal’s office will be working with an investigator from St. Catharines Fire Services, as well as investigators from the Niagara Regional Police.

As a safety precaution gas has been shut off in the area. Gas will be reinstated once it has been deemed safe to do so. With multiple fire hydrants being utilized residents in the area may notice dirty water at their taps for the duration of firefighting efforts. Crews remain on scene to manage and capture runoff water from the firefighting effort to protect watercourses and the environment.

Below, the Welland House Hotel was built in 1853 as a natural springs spa. The baths fell into disuse by 1909. It remained a hotel for many years until it closed in 1993. The building was sold and converted into student residences in 1994. (St. Catharines Library Files)