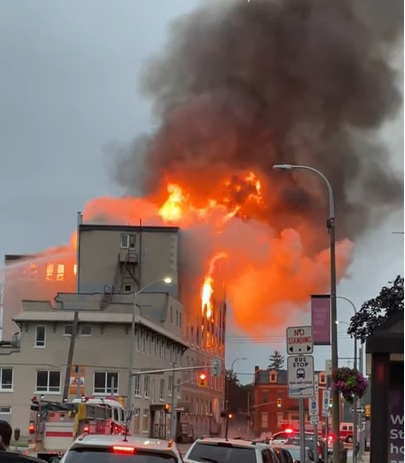 After an investigation by the Fire Marshall, the cause of the Welland House Hotel fire, July 12, 2021 remains a mystery.

There are few answers as of Friday when the investigation wrapped as to why the 165 year old, 5 story building was completely destroyed by flames.

It was determined that the origin of the fire was likely on the third floor, but the actual cause has been left undetermined.  Possible causes considered were squatters smoking or cooking in the building but due to the extensive damage there were no definite findings. When the July fire occurred, the building  was being considered for a heritage designation at the time of the blaze and city council approved the designation after it had already burned down.  Currently the site still has huge piles of debris from the old building, fenced off at Ontario, King and William Streets. Welland House was built in 1856, the last one standing of three grand spa hotels of the day built close to the old Welland Canal that were internationally known for their “healing waters.”

Some of its famous visitors over the years included Hollywood actress Grace Kelly, prime minister R.B. Bennett, and Jefferson Davis, former president of the Confederacy during the U.S. Civil War.

It was built largely by Black tradesmen, and it stopped functioning as a hotel around 1990 and afterward was used for a number of purposes, including a student residence, but had been vacant for several years before the fire.