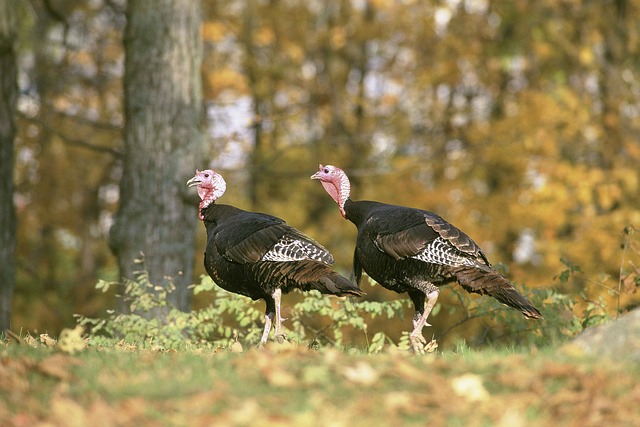 The name of turkeys doesn’t have anything to do with the country but early settlers called the birds turkeys because of their similarity to a European bird, the African Helmeted Guineafowl, which was known as the turkey-cock since it was believed to have come to Europe through Turkey.

Wild turkeys were hunted to extinction in Ontario by 1909 due to unregulated hunting and habitat loss, then the OFAH (Ontario Federation of Anglers and Hunters) and the NWTF (National Wild Turkey Federation) teamed up to trap turkeys across the US and reintroduced them, in the 80s. About 4,400 wild turkeys were released beginning in 1984 at 275 sites across the province as part of the effort to restore this bird. There are now over 70,000 wild turkeys in Ontario.

All the birds you see in the Ontario woods are descendants of those initial birds that were brought up and reintroduced. A real conservation success story.

Most turkeys sold at grocery stores are domesticated birds, which have been bred for their size and speed of growth to the point.  Most cannot fly, walk normally or even breed on their own because of their large size.

There is a power plant under construction in Minnesota that will burn 700,000 tons of turkey “litter” (a combination of droppings and bedding material) each year to provide power for up to 60,000 homes.
A STORY OF TURKEY ON THE WILD SIDE (pictured the turkey forest and turkey droppings) Recently I spent the afternoon scouting (slowly walking and listening) around a colleague’s property where I was given permission to hunt turkeys. Fall turkey hunting is challenging, because you need to find the birds and sneak around and set up an ambush in their projected path.

Armed with my trusty vintage binoculars, I went looking for any sign of the turkeys that live in these woods. After many hours of finding traces of only deer and bear I was thrilled to find some relatively fresh turkey poo and some scrapings, which lead me to their roost.

Wild turkeys spend the night up in trees, and I found a few trees with incredible amounts of poo all down the side of them. I can’t wait to set up my ambush near where they fly down in the morning, once the season opens mid-month.

Happy Thanksgiving…enjoy your turkey or whatever your tradition and the celebration of all this amazing country has to offer!

About the Author Randy Robertson

Randy Robertson has lived a life well-travelled and experienced. After spending his formative years working the oil fields, and finding out the hard way that being a professional trapper is not as lucrative as everybody says it is (well maybe not quite), Randy finally caved in and moved back to central Ontario including a stint in the Niagara region. A true man of adventure, when Randy is not hunting, fishing, taking pictures with his “classic” cameras (we’re talking film people) or riding his '81 motorcycle, you can find him at the local Tim Horton’s sitting around with his buddies griping about having to work a day job, and telling stories about his wild, younger days out west. As a contributor for niagarabuzz.ca Randy looks forward to always giving viewers what he calls “the straight goods”, because he has never been a liar, and he isn't about to start now.