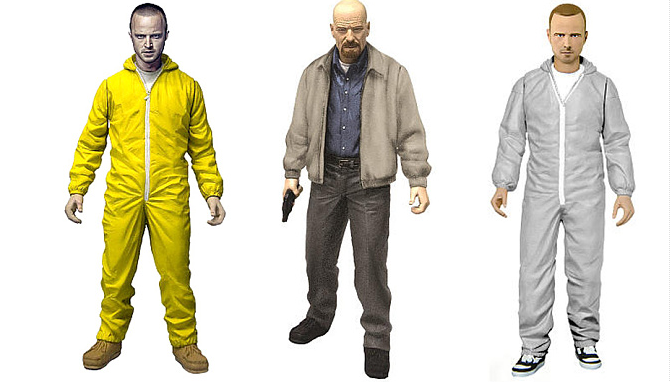 The American toy shop Toys “R” Us is getting some heat from parents for selling dolls based on the television series Breaking Bad.  The dolls are likenesses of the main characters that produce and sell crystal meth.

One of the  figures even holds a  gun with a detachable bag of cash and blue rocks that represent the drug .  Others are dressed in  protective suits like the characters on the show with a description on the outside of the box that says “he dares you to make your move.”

The toys although causing a lot of controversy are marked to be for kids 15 years of age and up and are available in the adult action figure department of the store.

ABOUT BREAKING BAD: Breaking Bad was a television program  based on the character of high school chemistry teacher Walter White who went into business with a  student, producing and selling crystal meth in order to make money for his family before he dies from terminal cancer. The series, which ended last year won many awards despite its controversial subject matter.

What do you think….are these action toys too much for kids?  Comments welcome.