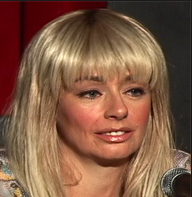 Trailer Park Boys (aka Ricky’s girlfriend) actress Lucy DeCoutere is the first woman to attach her name to CBC radio host Jian Ghomeshi regarding accusations of assault that included slapping and choking. Many other unnamed women have come forward with similar stories.

Eight women from across Canada now accuse Ghomeshi of abusive behaviour ranging from allegations of non-consensual beating and choking to workplace sexual harassment.

DeCoutere tweeted on Sunday and Monday regarding Ghomeshi, asking in one why he was so defensive and in another why the other women were afraid to attach their name to the issue.

Next post VIDEO>Picking the Perfect Paint with the Colour Wheel!

Previous post The Difference Between an Education and a Degree