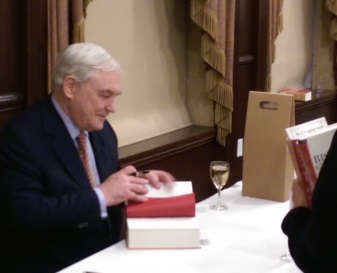 The over 275 attendees were treated to a reading from Black from his new book;  Rise to Greatness: The History of Canada from the Vikings to the Present.  It is an ambitious account of Canada’s history with a focus on the country’s leaders. Afterwards, Black provided commentary and took questions from the crowd.

It is his second effort since his release from a U.S. prison in 2012, where he spent 37 months for defrauding investors of his former company Hollinger International, which at the time was the third-largest English-language newspaper chain in the world. Black’s influential list of newspapers included London’s Daily Telegraph, the Chicago Sun-Times and the Jerusalem Post.

Event organizer Ken Boichuk says The Grimsby Author Series has gained tremendous success over the years and is already in its 13th season of bringing authors and audiences together.

All funds raised at events are in support of the Grimsby Public Library.  The next Grimsby Author Series event will be held on January 12 with Michael Winter who will be appearing with Alison Pick.

Pictures are courtesy of Gordana Mosher

Previous post You Are the Author of Your Life: Know When to Write a New Chapter