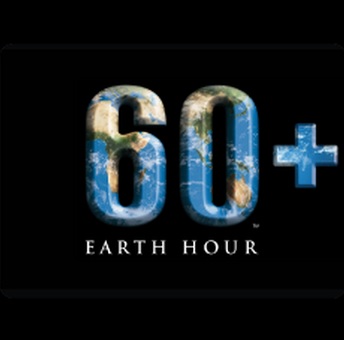 Tonight marks Earth Hour for Canadians….will you be jumping on board?

Earth Hour is a worldwide grassroots movement uniting people to protect the planet, and is organised by WWF. Engaging a massive mainstream community on a broad range of environmental issues, Earth Hour was famously started as a lights-off event in Sydney, Australia in 2007. Since then it has grown to engage more than 7000 cities and towns worldwide, and the one-hour event continues to remain the key driver of the now larger movement.

On Saturday, 28 March 8:30 p.m. local time, individuals, businesses, cities and landmarks around the world will switch off their lights for one hour to focus attention on climate change. As the lights go out, Earth Hour supporters will also be contributing real climate solutions to combat the globe’s biggest environmental challenge.

This year, Earth Hour is set to be a record-breaking celebration of our planet with an unprecedented 172 countries and territories having confirmed their participation, including nations on the climate frontlines like the Philippines, Maldives and Madagascar and key climate actors such as Brazil, the United States and China. Since its origin as a symbolic lights off event in Sydney in 2007, WWF’s Earth Hour has grown into the world’s largest grassroots movement for the environment igniting public awareness and action on climate in more than 7,000 cities across the world.

From Cambodia to Cameroon to Colombia, homes, offices, skylines and monuments will go dark as the world unites to inspire collective action to change climate change. Over 1,200 landmarks such as the Eiffel Tower in Paris and the Golden Gate Bridge in San Francisco will turn off their lights. Close to 40 UNESCO World Heritage Sites including the Acropolis in Athens and Edinburgh Castle in Scotland are also scheduled to go dark in support of Earth Hour.

As landmarks flip their switches off, WWF and Earth Hour teams will switch on the power of the crowd to address local climate issues. By empowering people to take concrete actions for climate — be it by raising their voice for stronger climate action or donating to WWF conservation projects — Earth Hour will bring people together to ensure the momentum to change climate change continues well beyond the hour.

“As Earth Hour continues to break records for global participation, our supporters continue to reach new heights for energy and creativity in using their power to make a difference. Every light switch turned off, every signature collected and every project funded, gives us renewed hope that together we can change climate change,” said Sudhanshu Sarronwala, Chair, Board of Directors, Earth Hour Global.

Even before Earth Hour sweeps across twenty-four time zones on Saturday, WWF teams are already using the power of the movement to drive concrete action and solutions on climate change. From collecting 100,000 signatures to urge a ban on the exploration of Arctic oil in Russia to reducing people’s dependency on firewood and forests by building sustainable livelihoods in Uganda, Earth Hour is empowering people to be a part of a global movement to take climate action.

In past months, Earth Hour supporters have also used their power on the Earth Hour crowdfunding platform to help build community climate resilience in India, Indonesia, Colombia and Portugal. WWF teams are also building on Earth Hour’s potential to inspire action from individuals, businesses and governments by advocating climate-friendly policy and legislation on themes such as access to renewable energy and reforestation.

“Earth Hour shows us what we can achieve together. From creating a forest in Uganda to lighting up entire villages with solar power in India and the Philippines, the power of the crowd to make change happen is phenomenal,” added Sarronwala. “With Earth Hour, every light switch turned off is hope for climate action turned on.”

Lights around the world will go out for one hour this weekend, but the need to take climate action extends throughout the year. As Earth Hour brings temporary darkness to many of the world’s most recognizable landmarks, WWF hopes to shed permanent light on the power each individual has to change climate change.

WWF is one of the world’s largest and most respected independent conservation organizations, with over five million supporters and a global network active in more than 100 countries. WWF’s mission is to stop the degradation of the earth’s natural environment and to build a future in which humans live in harmony with nature, by conserving the world’s biological diversity, ensuring that the use of renewable natural resources is sustainable, and promoting the reduction of pollution and wasteful consumption.

Next post SHEAR MADNESS: - Should You Shave Your Dog?