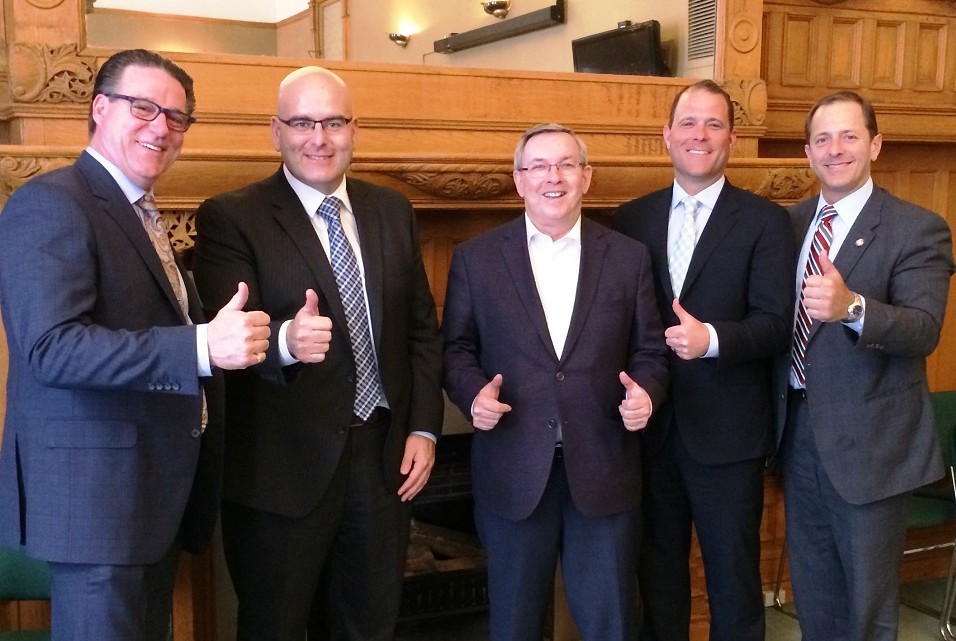 Today was a big day as officials from Niagara headed down to Queen’s Park to speak with Transportation Minister Steven Del Duca about the highly anticipated Niagara GO Rail Expansion.

The expansion is believed to be a potential game changer in that it will open up Niagara to the outside world as well as provide residents with opportunities outside of our boundaries that are cost effective and time efficient and is anticipated in total to cost about $130 million dollars. The new service would look something like this:  two five-car trains operating between Niagara Falls and the James St. North Station in Hamilton during morning and afternoon peaks to provide direct transfers with the two Lakeshore West trains stopping in Hamilton. One train would reverse to provide continuous all-day service, while the other would layover at James North Station or at Lewis Rd. during the day. A total of seven two-way trips would occur each day, and both trains would layover on new sidings built as part of the Niagara Falls station in the evening.

Niagara Regional Chair Alan Caslin commented that “today we clearly demonstrated to the Province that we are united in our efforts to bring daily GO train service to Niagara. This is our top priority and we delivered a compelling, viable and affordable business case to the Transportation Minister”.

Much time and effort have been put into the business case to push the Go initiative forward which officials believe will have a “transformative power” over Niagara’s economic future.

Minister Del Duca has committed to urgently scheduling a working session between provincial officials and the Niagara Go working group in the future and it is also anticipated that a meeting with Premier Wynne will follow at some point to outline the case for Go in Niagara.

Interview with Niagara Regional Chair Alan Caslin and niagarabuzz.ca below:

What do YOU think?   Is this going to happen?  Will a Go Train Service to niagara be transformative for you and your family?  Comments Welcome!

Next post No Doors, Windows or Licence Plates - Why Are You Pulling ME Over Officer?!

Previous post VIDEO>How Cool is This? Salad in a Jar - The PERFECT Lunches