Booze that Won’t Botch Your Diet 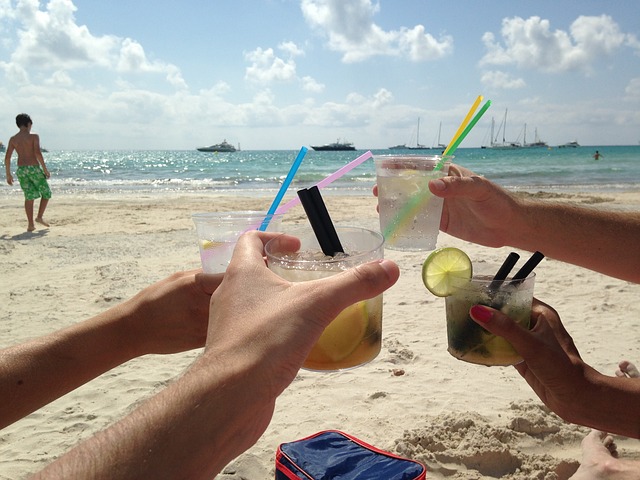 Summer is all about paring down the clothes and enjoying the great outdoor weather!

But patio cocktails can really pack on the pounds if you aren’t thoughtful in your choices.  Here are a few low cal options that you can enjoy with confidence and not sacrifice one iota of flavour.  Cheers! Champagne and other sparkling wines typically contain about the same number of calories as non-sparkling wines — about 20 calories per ounce. But champagne holds an advantage that other wines don’t, and it’s explained by the physics of the liquid itself. Since champagne forms a head when poured, once the foam disappears, the drinker is typically left with far less liquid than the glass allows. Less champagne in the glass means fewer calories in the tummy. The average 5-oz. glass of red wine contains about 115 calories and 4 g of carbohydrates. This is not a huge caloric hit for the average dieter.  Women should limit themselves to one glass in most cases, while men should stop at two. And if you’re having wine with dinner, consider counting the wine as your starch for the meal.  that means focus on lean protein and non starchy veggies should be your main eats.

For decades, the beer lover on a diet had few light beer options. In recent years, however, calorie-conscious beer drinkers have welcomed the arrival of an even lighter variety — the ultralight beer.

Whereas the average light beer contains about 100 calories per 12 oz. serving, ultralights offer a range of options with calories as low as 55 for the same serving size. Bud Select 55, Miller Genuine Draft 64 and Beck’s Premier Light are just a few of the more popular examples.

For people who LOVE their brews, ultralights may be the answer, however the low calories also mean the beers are lower in alcohol. The typical ultralight beer is less than 3 percent alcohol by volume, compared to the average 4.5 percent for light beers. As a result, you might find yourself downing way too many of them, eliminating the low-calorie advantage. Guinness might seem like a nightmare choice if you are looking to watch the calories.  It looks fattening enough, but looks can be deceiving. A 12-oz. serving of Guinness has 126 calories. That’s less than a Budweiser, a Heineken or a Miller High Life. Plus, drinking a rich, stout beer such as Guinness can be more satisfying than a more watery pilsner or lager. So you may be more willing to stop after one or two.

Not to mention, the health benefits of drinking Guinness extend further than the surprisingly low caloric content. Researchers at the University of Wisconsin found antioxidant compounds in Guinness that may prevent the kind of blood clotting that leads to heart attack. They claim a pint of Guinness a day does as much to fight the risk of heart attack as the daily low-dose aspirin many doctors recommend. Cocktails can be the most highly caloric drinks you’ll encounter in a bar. But they can also be among the lowest. You just have to know what to ask for and what to avoid.

Most standard varieties of 80 proof liquor — whiskey, vodka, rum, gin, tequila, brandy — have roughly 100 calories in a shot. Add ice and water or ice and club soda or ice and Diet Coke, and you’ve got a 100-calorie drink. But if you add orange juice or cola, the calorie total skyrockets.

Stay away from drinks containing fruit juice, sugary mixers such as grenadine and sweet and sour mix, and sweet liqueurs such as amaretto and Kahlua. If you can’t live without a margarita or strawberry daiquiri, grocery stores offer a growing selection of sugar-free mixers.

Shaken or stirred, straight up or on the rocks, it is the classic cocktail: a subtle blend of gin — though the vodka martini may have eclipsed the popularity of the original — a hint of vermouth and an olive or a lemon twist.

Because it consists of little more than its base liquor, it is a low calorie cocktail. You’ll get about 100 calories per single-shot martini. And don’t worry about the olives. They only contribute an extra five calories each. If light beer, wine or a stripped-down mixed drink doesn’t excite you what about the mojito?

A favorite drink of Ernest Hemingway, the mojito’s provenance is 16th century Cuba, though its exact origin is debated. In its present form, it combines rum with muddled mint, lime juice, and sugar or simple syrup, topped with club soda and served on ice.

While it does contain sugarit is only a teaspoon so it’s a good alternative to fruity cocktails and blended drinks.

That teaspoon of sugar equates to just 15 calories, meaning the typical mojito clocks in at 115 to 130 calories. And the fresh mint used in the drink has its own potential advantages.

Cheers to Your Health

So there you have if folks….a few delicious drinks that won’t sink your diet and when mixed with moderation, you’ve got a winning combination!