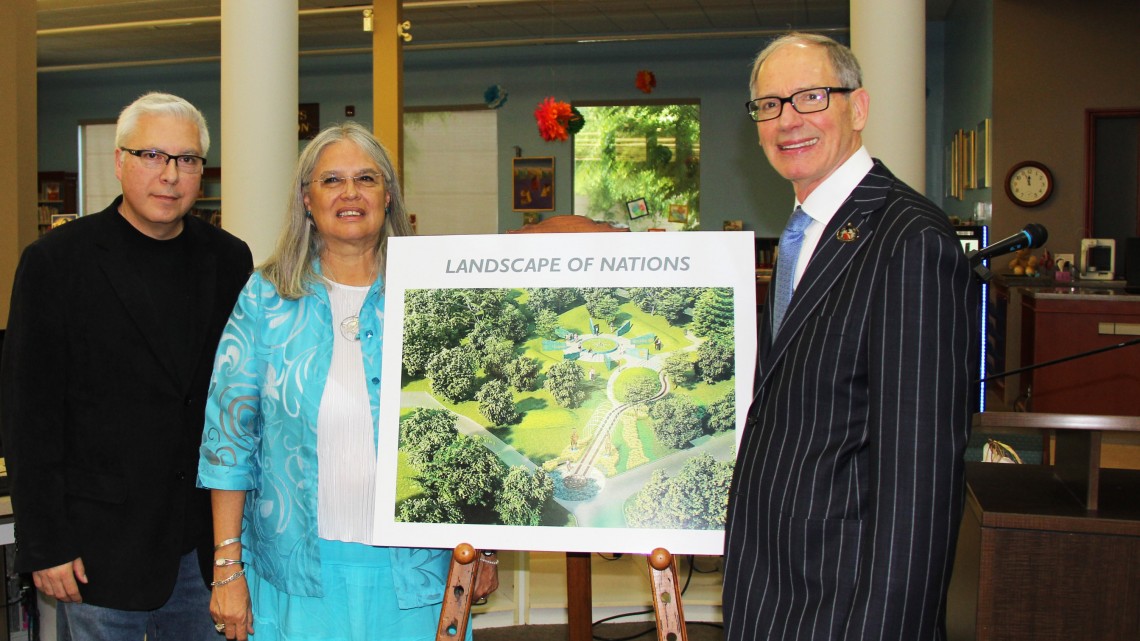 (IN MAIN PHOTO Elected Chief Ava Hill with Tim Johnson and Richard Merritt, co-chairs of the Landscape of Nations Working Group, announce the public phase of the memorial’s capital campaign in the Niagara-on-the-Lake Public Library).

The War of 1812 Bicentennial Working Group’s Landscape of Nations project recently announced they have raised $1.05 million toward a total campaign goal of $1.4 million for an exciting piece of public artwork that will be on display at Queenston Heights Park in Niagara-On-The-Lake by 2016.  This announcement served as a kick off for their national campaign to raise the rest of the monies needed.

The artwork will represent a lasting legacy to the contributions and sacrifices made by the Six Nations of the Grand River and their Native Allies at the Battle of Queenston Heights and throughout the War of 1812.  It will also commemorate the Council of Peace and Reconciliation held in Niagara on August 31 and September 1, 1815.

It will feature a monument of two bronze figures of John Norton and John Brant, the two primary Native leaders who led Six Nations and Native ally forces at the Battle of Queenston Heights as well as other engagements throughout the region.

Here is a little more background on the new addition to the Queenston Heights landscape: Here’s a little information if you are interested in helping the project along:

Previous post Five skills to MAKE YOU INSTANTLY HIREABLE IN 2015