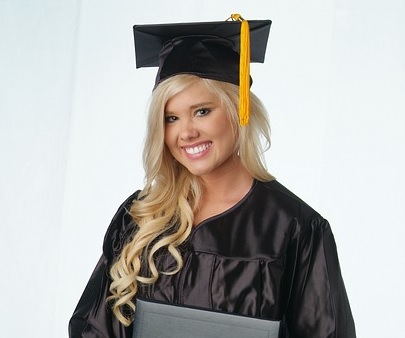 My mom went to junior college when she was 33 years old, and became a paralegal when she was 35. My brother and I, who were 9 and 7 when she started school, spent those two years eating a lot of Little Caesars – pizza and breadsticks became a way of life for us.

I remember her buying our family’s first computer with her student loans. I remember that it didn’t have a mouse, and that you moved the cursor by pressing control + alt, and using the arrow keys. I remember how proud she was that we actually owned a computer.

My mom hated pictures of herself, and when she passed away we found only one in her belongings: her college graduation photo.

When I was 20 years old I lived in low-income housing, which was a big step up from the Honda Civic I had lived in 18 months prior to that.

Most days I ate breakfast at a nearby Holiday Inn my friend Eric (nicknamed “The Schmoll” for reasons that were never quite clear) worked at. I would go in and pick up two Otis Spunkmeyer double chocolate chip muffins, courtesy of The Schmoll.

Eric was a good guy and moved with my brother and I to Arizona when I decided to go to college, after I turned 21. Four years later, through a creative combination of classes, CLEP tests, hard work, little sleep, and an extremely large quantity of caffeine, I graduated with my bachelor’s degree and two masters degrees.

Ever since I graduated college, I haven’t had to resort to eating donated Otis Spunkmeyer double chocolate muffins.

Stories of people who piled up excessive student loan debt, only to find that they are unable to get the job they had hoped for (or any job at all), are all too common. Those stories are real, and involve real people who are struggling to get out from under the weight of a student loan system that needs reform – and at times, their own poor decisions. The counter argument from higher education tends to be data oriented. Every single piece of data shows that you will have greater job security, and higher lifetime earnings, if you have a degree.

It’s a statistically valid argument that does nothing to sway the conversation.

I don’t relate to numbers. I don’t see myself in the unseen masses that make up statistics. Neither do most people. When it comes to getting a degree, I saw myself in the story of my own mom. She decided she needed an education, and found a way to get one. Because she could do it, I knew I could too. I knew I could write a story similar to the one she had written and create a different life for myself.

I knew I could have a life where I could pay not only for my own muffins, but the muffins of my children as well.

The Need for a Better Story

Higher education needs to tell a better story. Colleges and universities need to tell the stories of the people they impact, and the lives they change.

And schools don’t need to tell a better story to attract more students.

They need to do it because future students are hearing that college is a bad investment, and won’t possibly pay off. Rather than hearing stories of students who approached financing their education in a way that minimized debt, they hear (the very real) stories of people who piled up $100,000 or more in debt for a degree that pays $30,000. But is less education really the key to success in a globalized, highly technical economy? I don’t think so.

For every overburdened student that graduates with too much debt and too few employment prospects, there is a student who graduates and leverages their education (including the network you build) to get a decent job, start a business, or create a career.

For every graduate who works three jobs to make ends meet, there are two who could buy her kids better pizza than Little Caesars, or afford their own double chocolate chip muffins.