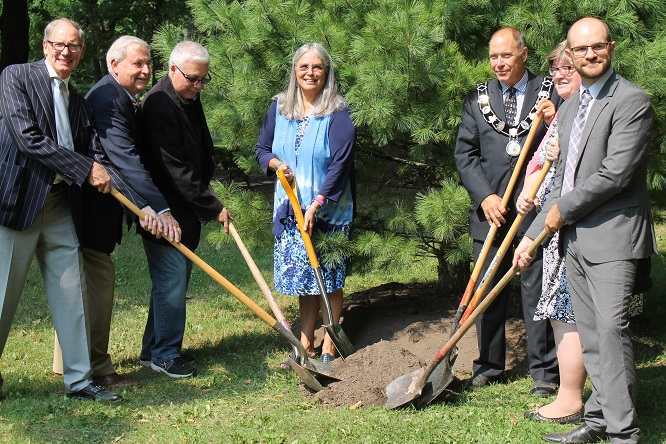 It was a picture perfect day under the trees in Queenston Heights Park.

On Tuesday, as part of a celebration to commemorate the 200th anniversary of the historic international Council of Peace and Reconciliation, the Town’s War of 1812 Bicentennial Working Group held a ceremonial groundbreaking to launch the construction of a unique and educational public art installation, known as “Landscape of Nations.”

This  initiative will be a lasting reminder of the significant contributions and sacrifices made by the Six Nations and the Native Allies throughout the War of 1812 and leading up to the Council of Peace and Reconciliation.

A crowd gathered close to the base of the Brock Monument  to commemorate this important event. The programme included a ceremonial planting of an eastern white pine tree, a performance of the traditional “Standing Quiver Dance” and the symbolic gesture of the “Bundling of 7 Arrows” to proudly reflect strength and unity for the next seven generations.

Pictured below the crowd in Queenston Heights Park Native representatives from across Ontario and upstate New York were on hand for the event, including Six Nation Chief Ava Hill, Grand Chief Gordon Peters of the Association of Iroquois and Allied Indians, Jamie Jacobs (Tonawanda Seneca), Cultural & Historical Educator at the Rochester Museum, and lawyer and historian Paul Williams.  Mr. Williams, who has conducted extensive research on Native affairs in the Niagara region and involvement in the War of 1812, delivered a speech titled “After 200 Years: the Prognosis for Peace and Reconciliation.” Pictured below: Participants in the ceremony Cam and Eddy “Today marks an important milestone as we usher in a new era of peace and reconciliation,” stated Tim Johnson, Working Group Co-Chair and who is with the Smithsonian Institution’s Museum of the Native American.  “The celebration of this historic Council between the Six Nations of Grand River & upstate New York and the British Crown 200 years ago today, as well as the launch of this memorial, affirms the proper place of Native peoples at the core of Canadian history.”

Pat Darte, Lord Mayor of the Town of Niagara-on-the-Lake, congratulated the Working Group for their tireless efforts on this project. “On behalf of Town Council and our residents, thank you to everyone involved in today’s celebration, particularly our Native guests, for making this project a lasting symbol of hope and reconciliation for generations to come.”

Working Group Co-Chair Dr. Richard Merritt, a noted local historian, thanked the many generous benefactors, many of whom were present at the event.  “It may have taken 200 years to attain this well-deserved recognition for our Native Allies, but through so many people’s generosity over the last few years, it will now become a reality.”

The plan for the memorial is unveiled to the crowd pictured below: Close to $1.2 million has been raised thus far towards the $1.4 million goal for the Landscape of Nations Memorial which is set to be completed by June 2016.

Pictured below: Lord Mayor Pat Darte and Campaign Director Michele-Elise Burnett with the Bundle of 7 Arrows

Those who wish to donate to the Landscape of Nations project are invited to visit www.landscapeofnations.com or contact John Hawley at 905-468-2766 or john.hawley12@gmail.com.  All donations receive a tax receipt from the Town.