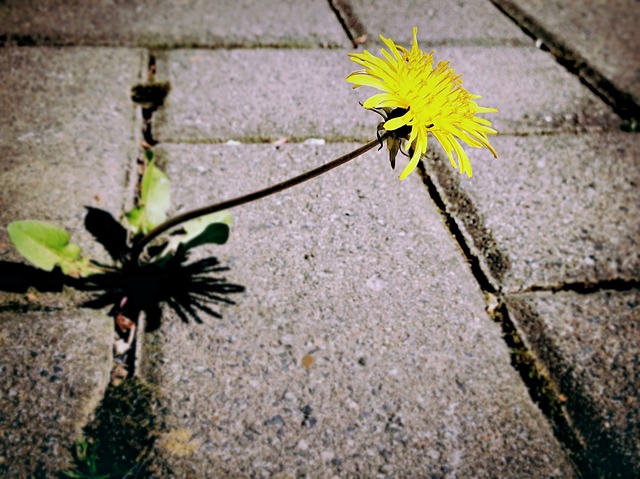 Last night, I was walking my baby bichon on the trail near my house. The trail starts out winding through the neighborhood but eventually leads you to the woods. It feels as if you’re taking a hike immersed in nature, even though you’re mere minutes from town.

When you’re in the woods, one thing becomes apparent quickly – resiliency! It’s hard to hold nature back. It’s particularly hard to hold back weeds. They grow around everything.

On any given walk outside, you’ll notice the absolute sheer profusion of them. They seem to pop up everywhere. I started thinking – because I overthink everything – that we should all be like a weed.

We should never be held back or let anything hold us back.

Having the Tenacity of a Weed

Weeds are known for their relatively short growing cycles, during which they yield an abundance of seeds. They usually have the capacity to grow in less than ideal surroundings and tend to spread quickly.

In the late 1870’s, William Beal, a botanist, decided to see how long weed seeds could remain sustainable. He buried 20 jars that were each filled with 1,000 seeds. Every five years, he dug up a jar and planted its contents to see which seeds would still sprout. Even though he died in 1927, his colleagues continued his work. By the time 1979 rolled around, they watched seeds that were 100 years old still germinate.

What’s not to be admired? We should all have the resolve of the weed. Weeds teach us that you don’t have to be the most beautiful flower because it’s all a matter of what’s inside of us. It’s our attitude that does the work.

Seven Reasons Why Being Like a Weed, Just Works

The Environment Doesn’t Matter – The weed will flourish in all environments and they will find a way to break barriers. Sidewalk? No problem. Asphalt? No problem. They see their opening and go for it. Hot or cold weather? Doesn’t matter. They won’t be deterred.

Weeds Get by with a Little Help from Their Friends – Weeds have realized there is strength in numbers. They spread roots to other plants. If you pull a weed, you’ll probably get five other ones to replace it. You can pluck them but they will still leave pieces behind in the dirt. They just dig in, hold on tightly, and then multiply! They will not let their friends down.

Weeds Develop Earlier and Grow Faster – They are leaders. They fear not when they have to step outside of their winter abode. Even in harsh weather conditions, the weed remains alive. They just hang out under the snow and wait to emerge when the timing is right.

Weeds like Diversity – They don’t just stay in the inner weed circle. They give nourishment to others. They cross the species lines and help other organisms. Bees sometimes depend on weeds for food and we know the importance of bees in society.

They’ve Got Your Back – They are super supportive and have your back. They won’t let the topsoil get washed away. They offer protection and throw you a life-line when needed.

They Keep the Pests at Bay – Weeds help control harmful insects and attract beneficial ones such as butterflies. And, butterflies are wonderful adornments for any garden.

Persistency Rules – They find a way to get the job done. They don’t give up. They are not afraid to stand alongside the prettiest flower and they will probably be the last one standing.

I definitely think I want to be the weed.