HOW TO SKIN A WATERMELON LIKE A STAR: Long Weekend Party Trick!!

Ok who doesn’t love watermelon on a super hot long weekend like this?

Here is a cool new twist to dealing with that skin before you enjoy.  Have fun!!

And  if this handy trick is not enough, here are more things you probably didn’t know about Watermelons :

At 46 calories per cup, watermelon offers 20% of your daily intake of vitamin C and 17% vitamin A.

It has more lycopene than raw tomatoes

In just one cup, watermelon has 1.5 times the stuff than a large fresh tomato, 6 milligrams compared to 4 milligrams, according to the USDA. That matters because lycopene is thought to act as a super antioxidant, stopping free radicals from damaging your cells and messing with your immune system. Some research even suggests that lycopene, typically found in red fruits and vegetables, may help fight heart disease and several types of cancer. Pro tip: To retain the most antioxidants in this delicious superfood, store your watermelon at room temperature before slicing.

The juice may relieve muscle soreness

A Spanish study in the Journal of Agricultural and Food Chemistry found that drinking watermelon juice can actually be quite soothing after a grueling workout. Athletes who consumed a little more than 16 ounces an hour before exercise had less muscle soreness and a lower heart rate within a day.

That may be because watermelon contains a natural substance called citrulline that’s been tied to improved artery function and lower blood pressure. In fact, its ability to relax the blood vessels led University researchers to say watermelon has Viagra-like effects. But you’ll need to look beyond the pink flesh if you really want to load up on citrulline—it’s concentrated most in the rind.

It’s a fruit AND a vegetable

Talk about an overachiever. Like most fruits, watermelon is the product of a seed-producing plant and has a signature sweet taste. But it can be traced back to the squash, pumpkin, and cucumber family known as Cucurbitaceae. Remember how you can eat the rind? The dual nature of watermelon makes it all edible, so there’s no excuse to leave any part behind.

Now this is a food with some serious hydration power. Watermelon is 91.5% water. That’s a big deal seeing as how being dehydrated is bad for your health. A study published in The Journal of Nutrition found that women with even mild dehydration experienced headaches, poor concentration, fatigue, and worse moods. More reason to whip up some watermelon recipes, stat.

It’s hard to believe there’s a watermelon that’s NOT pink on the inside, but there’s another variety, known as Yellow Crimson, has a sunny interior and the flesh has a sweeter, honey-like taste. Thing is, the two are nearly identical on the outside, so unless you’re reading the signs at your grocery store or farmers’ market, it can be hard to tell which is which. If you want the regular pink watermelon, ask for a Crimson Sweet.

Just keep in mind that no one really knows what, if any, nutritional value the yellow variety offers. Most research has been done on the pink kind, so best to stick with that or round up a good mix of both.

Jello Watermelon HOW TO! 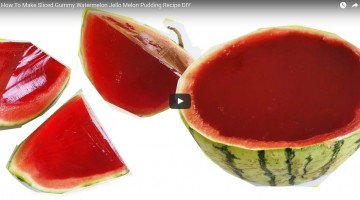