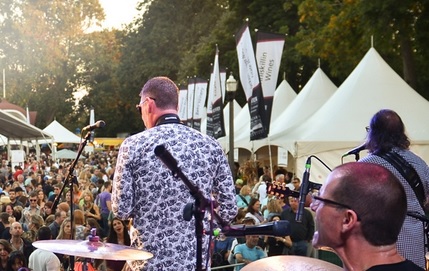 The Niagara Wine Festival is in full swing and the weather will be great to check out the Montebello Park experience in St. Catharines.

The hub of the Niagara Wine Festival can be found in historic Montebello Park in downtown St. Catharines. One of the oldest and most beautiful parks in the Niagara Region comes alive for two weekends in September. A celebration of Niagara and the bounty of harvest, the Montebello Park food and wine experience truly showcases all that the Region has to offer. Local chefs will provide regional cuisine from one to three tokens per portion, while VQA wines can be purchased by the sample or glass. Festival tokens can be purchased in $3.25 (HST included) denominations or in advance at the Festival office.

Today is New Country Day and the entertainment lineup features some of today’s hottest country acts including:

Mike Lynch is no stranger to hard work and has miles of road-tested performances across Canada. With many cross-Canada tours under his belt, Mike has appeared with Blackie and The Rodeo Kings, Jason McCoy, Great Big Sea,Charlie Major, Clayton Bellamy, and a host of others. Mike Lynch has been writing, recording, and performing his own music for nearly 15 years, but if you ask him about that he would probably say: “Heck, I’m just getting’ started!”

Brad Battle writes and sings from the heart. His sincerity and honesty translates into everyone being able to relate to his music. Brad’s brand of Pop/Country music is catchy and written based on his life experiences. Brad is ready to share his music with the world. After taking a hiatus to start a family, Brad is once again eager to pour his heart and soul into creating music. Recently, Brad has been working on his own material, in addition to collaborating with long time friend and country music star Tim Hicks. Check out Brad’s newest songs “You Better Kiss Me” and “Singing You A Love Song”

When you’re declared Group of the Year at Canada’s biggest country music awards show, that’s major validation from a community with high standards. Ontario’s Small Town Pistols won the CCMA title in 2014 after the brother and sister reunited for their 2013 self-titled debut. Now Amanda and Tyler Wilkinson — formerly of country trio The Wilkinsons — are back with the follow-up, Pistology, an album that is personal and sometimes edgy, covering everything from parenthood and family values to vices and rivals. There’s even a fictitious song about murder.

For more information on the niagara wine Festival click HERE