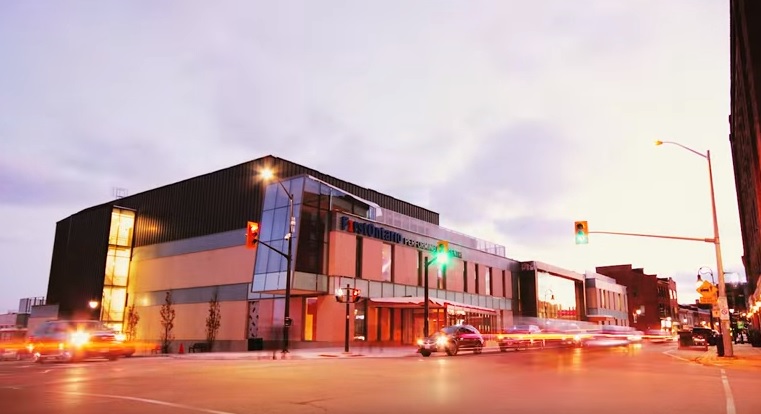 Last night patrons celebrated the official opening of the FirstOntario Performing Arts Centre in St. Catharines.  The impressive $60-million St. Paul Street facility which has four venues for large and small events has been years in the making.

The opening evening began with a welcome from First Nations group Ohnia:Kara singers, ribbon cuttings, sparkling drinks and a thrilling rendition of “Hallelujah” by Chorus Niagara.

The house was packed with donors, dignitaries and the community at large during the Opening Celebration in downtown St. Catharines. Juno-award winning Serena Ryder headlined a variety of performances in Partridge Hall along with Mark Lalama, Chorus Niagara, Karin Di Bella, WilliamYong and Hercina Arts Collective. (Ryder pictured below) “The opening of the FirstOntario Performing Arts Centre is the result of the culmination of work from all levels of government and community engagement, said Chris Bittle (MP, St. Catharines). “The PAC caps the incredible revitalization of our downtown and I look forward to seeing the cultural impact, right in the heart of St. Catharines.”

Eagerly anticipated by the community as a first-of-its-kind performance arts hub, main street centerpiece, and both a key indicator and driver of substantive downtown revitalization, the fully-realized facility stood up to its promise as a state-of-the-art performance hall and captivated both audience and performers alike.

“The new FirstOntario Performing Arts Centre will be a stunning place to showcase our province’s vibrant culture and will contribute to a dynamic regional arts and culture hub in St. Catharines,” said  Hon. Jim Bradley (MPP, St. Catharines).  “I am pleased that our government has made a major financial contribution to this project and in doing so, has made an investment that will help create jobs, build the local economy and attract visitors to our part of Ontario.”

The Government of Canada contributed up to $18 million to this project from the Major Infrastructure Component of the Building Canada Fund. The Government of Ontario also contributed $18 million, with the City of St. Catharines responsible for the $24 million-balance of the total project cost of $60 million. As part of the City of St. Catharines’ funding formula, $5 million is being raised through a community fundraising campaign.

“The opening of the FirstOntario Performing Arts Centre is the realization of a dream for so many in our community. Congratulations to everyone who has been involved in this project over many years,” said Mayor Walter Sendzik. “This unique centre will forever change the face of downtown St. Catharines, serving as a catalyst for growth and expansion of new businesses and fostering a vibrant arts and cultural sector. Congratulations!”

The Performing Arts Centre is the new cultural home for the community. As a fitting end to the first act of the opening ceremony, the entire audience participated in a simultaneous and performative group ribbon cutting. Over 1500 feet of ribbon was run throughout Partridge Hall for a truly memorable moment as a way to recognize how many have come together to make our collective dreams a reality.

Below is pictured a scene from the Opening Ceremonies. It took a city filled with visionaries and community leaders to build the four state-of-the-art venues now housed in the FirstOntario Performing Arts Centre as seen in this video that proclaims “The Arts Live Here!” (Produced by Four Grounds Media)

This video features Partridge Hall which hosts accoustic and amplified events as well as a spotlight on the incredible Steinway Piano . (Produced by Brain Farm)

Adjacent to Brock University’s Marilyn I. Walker School of Fine and Performing Arts (MIWSFPA), the PAC offers space for students and faculty to use during school hours. This integrated approach creates a substantial opportunity for music, dramatic arts and visual arts faculties to both grow organically and be surrounded in a performing arts atmosphere.

“The FirstOntario Performing Arts Centre is ready to welcome local artists, students and world-renowned performers. The centre is unique, both in design and in partnerships. The multi-venue design makes for a very adaptable and distinct space,” affirmed Executive Director Steve Solski. “We can showcase everything from symphonies and choirs, to theatre, film and music—multiple events can happen simultaneously. The partnership with Brock University’s MIWSFPA creates the opportunity for 500 students a day to utilize the teaching space by day and showcase their talents. The entire project features an electric synergy of entertainment, culture, outreach and education.”

“These multi-purpose rooms provide enormous versatility to mount a wide range of performances and events,” explained Gary McCluskie, Principal, Diamond Schmitt Architects. “Partridge Hall is a rare example of a venue that can accommodate acoustic and amplified concerts without changing the architectural character of the space. Acoustic material is lowered for amplified concerts behind scalloped wooden slat panels that line the room.”

Festivities continued today with an open house for the community.

About the FirstOntario Performing Arts Centre

The FirstOntario Performing Arts Centre is a 95,000sq.ft. cultural complex comprised of four state-of-the-art performance venues that will host a signature presentation of international and local performing artists. This Diamond + Schmitt designed facility is a vital component in the renaissance of Downtown St. Catharines, serving as the catalyst in thoroughly modernizing the area and reinforcing the brilliance of Niagara Region’s diverse cultural cluster. The Centre will offer local arts groups opportunities to produce and perform, and redefine the downtown core as a hotbed for culture and the arts. The local economy is poised to boom through attracting not only new visitors, but also new business development. Brock University students studying at the Marilyn I. Walker School of Fine and Performing Arts will benefit from two of the performance venues, which will double as learning environments – Cairns Recital Hall and the yet unnamed Film House. www.FirstOntarioPAC.ca