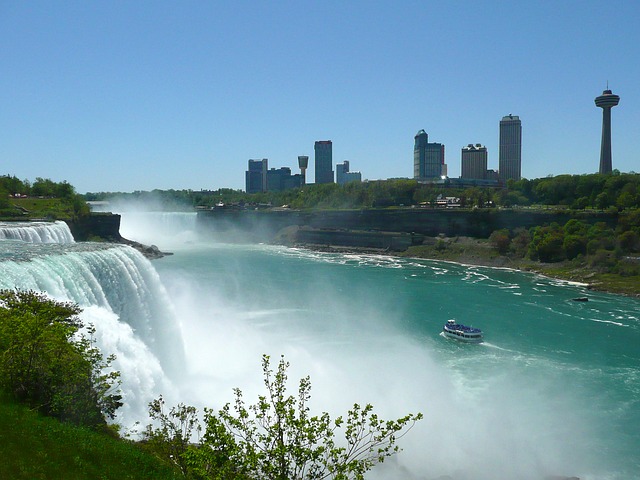 We all know that Niagara Falls is captivating to look at, but how much do you actually know about the Falls? There is so much intriguing history and interesting facts about Niagara Falls.

Fact #1: The Niagara Falls is moving!

Scientists have discovered that the Niagara Falls have moved back 7 miles (or 11 km) in the past 12,500 years. The reason behind this is because over 70 gallons of water have eroded the rock which have determined the waterfalls position. This averages to approximately 4 feet per year.

The clock is ticking. Due to the current rate of erosion, scientists believe that between 15,000 – 50,000 years from now, they may disappear completely into a fast running river and a series of rapids that comes directly from Lake Erie. Fact #2: The Horseshoe Falls has frozen over once, but the American Falls have frozen over 6 times.

The American Falls are susceptible to freezing because it’s only a small amount of water compared to the Horseshoe Falls that flows over the cusp. Known to us today, the American Falls have frozen over 6 times, but it could be more if we delve further back into history. The Winter flow is reduced to 8,000 cubic feet of water per second, compared to 681,750 per second over the Horseshoe Falls. The lack of water just barely covers the rock face of the Falls and during the harshest of Winters, ice dams build up along Goat Island drastically reducing the flow to the northern channel that produces the water over the American Falls. Occasionally this freezes all remaining water and as a result, the water quickly freezes over.

When the temperature becomes consistently cold, the water creates ice formations along the banks of the falls. Ice is then created in mounds of ice that stretch right across the river and form an “ice bridge”. Up until 1912 when three lives were tragically lost, people were actually able to walk out on the ice bridge. People set up shanties selling liquor and photographs, and some even tobogganed! Fact #3:  Numerous barrel attempts succeeded, but someone actually attempted to go over Niagara Falls in a Jet Ski…and failed.

Perhaps inspired by James Bond, 39-year-old Californian Robert Overacker decided to ride over Niagara Falls in a Jet Ski on October 1, 1995. The plan was to abandon the craft just before it went over the Falls and descend into the pool of water below by a rocket-propelled parachute on his back. This did not happen. The parachute flew right off his back and hit the water before he did. His body was recovered shortly after. Fact #4: The first person to go over the Niagara Falls in a barrel was a woman. On October 24th, 1901 on her 63rd birthday, Annie Edson Taylor became the first person to survive a trip over the Horseshoe Falls in a barrel and survived.  This was a feat never before accomplished before. She used a custom-made barrel for her trip made of oak and iron and padded with a mattress.

Not only did she survive, but she escaped without a broken bone. She had a slight scalp wound, a moderate concussion, some shock for her nervous system and bruises about the body.

The reason she attempted this daredevil move was to gain financial freedom. She made a small amount of money, but never the wealth that she desired.

The “Onguiaahra” tribe is one of the earliest known settlers to Niagara Falls, which means “Thunder of Waters”. The name “Onguiaahra” appears on maps as early as 1641.

They were an Iroquois tribe named the “Neutrals” by French settlers who found them helpful in settling disputes between the Hurons and Iroquois tribes.

On March 29th 1848, it became historically known as the “Day Niagara Falls Went Dry”. This was due to an ice jam in the upper river for several hours. The flow was stopped enough that those people actually walked out onto the Falls to discover artifacts.

In 1969, the US Army Corps of Engineers built dams which stopped the water flow over the American Falls. This was done to allow a study of the rock formations at the crest of the Falls and if they could be removed at the base of the American Falls. In the end, the engineers abandoned the project.