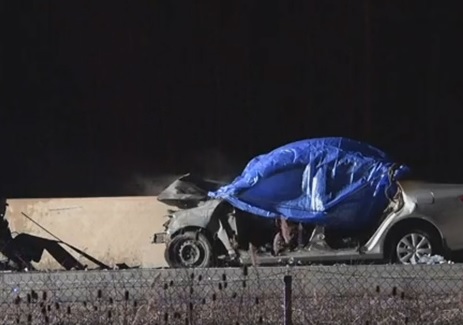 OPP have released the names of the drivers involved in a fatal wrong way crash in Stoney Creek last weekend.  It was early Sunday morning when a driver entered the QEW going the wrong way hitting another car in the Fort Erie bound lanes near Fruitland Road head on.

Police say the wrong way driver has been identified as 21 year old Vukasin Krsmanovic of Ancaster.

The deceased is identified as 38 year old Khoi Dinh Le of Cambridge who died after his car burst into flames.

One person is dead and another  is in hospital after a wrong way  two-vehicle collision on the QEW in Stoney Creek by Fruitland Rd that occurred in the Fort-Erie bound lanes around 5:00 a.m. this morning.

The other has been take on hospital with non-life threatening injuries. OPP were still trying to confirm which of the two cars was travelling in the wrong direction.

Police say although alcohol is typically a factor in wrong-way collisions, it is too early on in the investigation to confirm whether it played a role.

OPP are holding the area for an unmanned aerial drone to map the scene of the crash and for the vehicles to be transported to forensic sciences. The road is expected to stay closed until about noon.

Police are still trying to piece together what happened and are unsure how long the driver had been on the wrong side of the highway.

All Fort Erie-bound lanes of the highway at Fruitland Road have been closed as police continue to investigate the crash.