Rob Ford – A profoundly Human Guy whose Presence will be Missed. 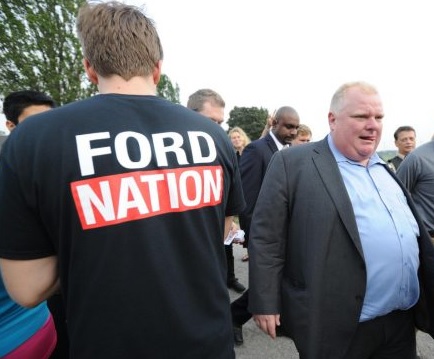 Mayor for four years in Toronto (2010-1014), Robert Bruce Ford was not everyone’s cup of tea, but he was real and his antics gained him worldwide notice as Ford Nation took over.   The married father of two young children died after 18 months of treatment for a rare cancer first diagnosed in the midst of his 2014 bid to be re-elected mayor. Ford would have turned 47 on May 28. The below reel features Rob and his brother Doug singing “Ford Nation” a song that explores the deeper layers of the infamous mayor’s troubled past and hopes during his bid for re-election.

The son of self-made millionaire Doug Ford Sr. and Diane Ford, worked for the family label-making company before deciding to go into politics like his dad who was once a Progressive Conservative MPP.

He didn’t win an Etobicoke council seat right away but, after the 2000 election, started a 10 year stint that saw him stand against perceived overspending and face criticism for insults and unsavoury comments.

Ford built a name for himself on talk radio as a plain-spoken champion of the underdog, and carried that through into a 2010 mayoral bid that quickly gained momentum and propelled him into the position of Mayor where he found lots of popularity at first when he axed the vehicle registration tax, made the TTC an essential service and “stopped the gravy train” by cutting councillor office budgets.

After that things seemed to change with tons of controversy around him that included drug and alcohol abuse.  However, he did manage to become the most talked about Canadian news story in the history of US media. Despite his flaws the words of current Toronto Mayor John Tory seem to reflect on his legacy well as he called him “A profoundly human guy whose presence in our city will be missed.”